Portland, Ore. (April 1, 2017) -- The second installment of Willamette: The Pinot Noir Barrel Auction, a trade-only showcase of rare wines hosted by the Willamette Valley Wineries Association (WVWA), is a wrap. Sixty-nine Oregon producers contributed one-off Pinot noirs from the lauded 2015 vintage for auction, drawing more than 400 attendees and raising close to half a million dollars in wine sales for the regional association.

“The response to this event has been nothing short of remarkable, and we could not be more pleased,” said Pat Dudley, vintner and auction co-chair. “At the same time, I’m not entirely surprised. The Willamette Valley has come to be recognized as one of the most exciting wine regions in the world, and this auction offers the highest expressions of Pinot noir from our top producers. There is nothing else like it.”

The festivities began on March 31st at three welcome parties featuring a variety of wines paired with favorite local food. Guests were shuttled to a nearby winery for each event and sampled library wines and current release Pinots as well as Chardonnay and sparkling wine. On Saturday, bidders and guests tasted through the line-up of 69 lots at The Allison Inn, and it became quickly apparent that the 2015 Oregon vintage is living up to the excitement. These limited-production results of careful selection and blending are the pinnacle of Oregon’s most celebrated region.

This auction raises the bar once more for Willamette Valley wine and its pursuit of quality. Exceeding expectations, this year’s auction averaged over $1,100 per case (comparing to last year’s average of $1000/case) and further signifying the region’s presence on the world wine stage. The unique wines are bid on by members of the national and international wine trade and ultimately appear in select retailers and restaurants throughout the country.

The WVWA already has its sights set on next year and the third consecutive Pinot Noir Barrel Auction on April 7, 2018. 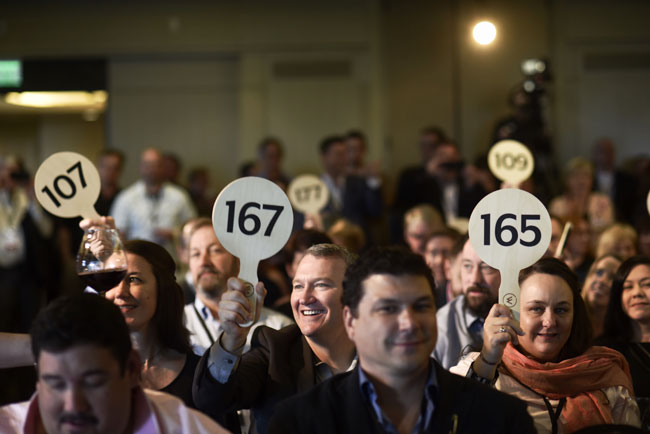 The WVWA is a non-profit industry association dedicated to achieving recognition for Oregon’s acclaimed Willamette Valley as a premier Pinot noir-producing region. Currently, the WVWA has more than 230 members representing wineries and tasting rooms throughout the Willamette Valley region from Portland to Eugene. For more information, please visit www.willamettewines.com, call 503-297-2962, or follow on Twitter @wvwines and on Facebook.