Bug Pest Continues to Spread Slowly, But No Damage Yet in California Crops
by Ted Rieger
March 08, 2017 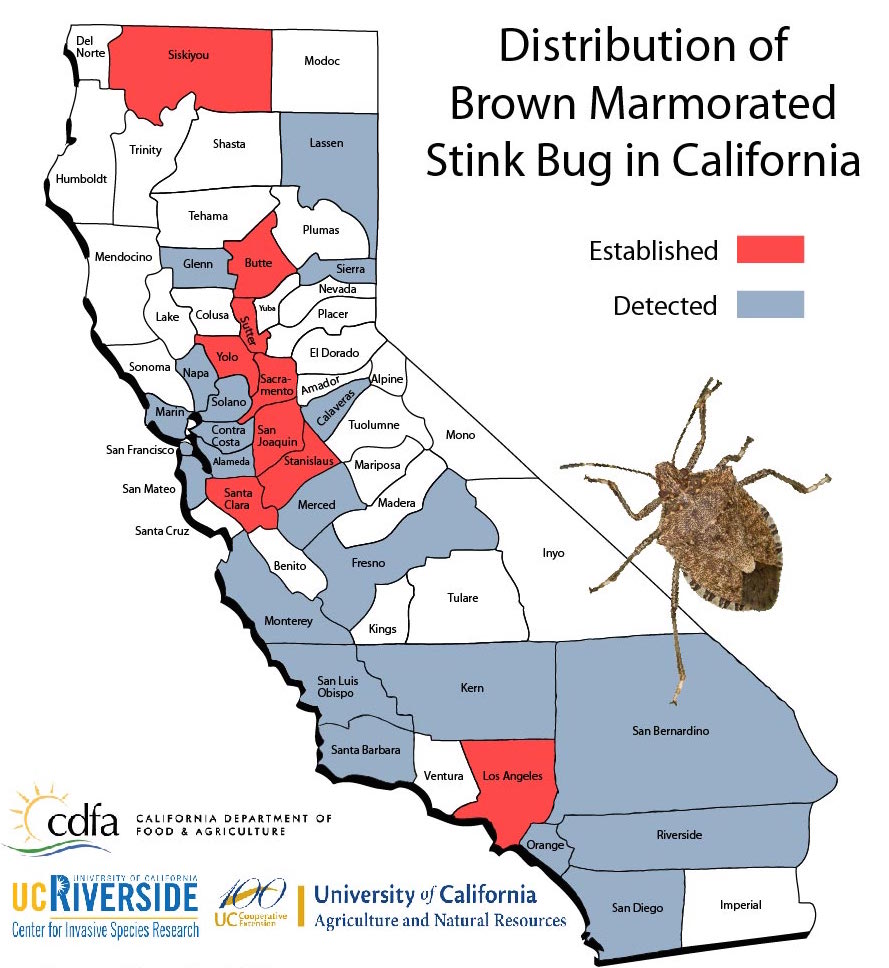 Although the marmorated stink bug (BMSB) (Halyomorpha halys) has not caused any reported damage to date in commercial agricultural crops in California, it was found within commercial farming areas in California in 2016. Five BMSBs were trapped near a vineyard in the Clarksburg American Viticulture Area in Yolo County last summer. In October 2016, 17 adult BMSBs were caught in traps in a commercial peach orchard near Modesto in Stanislaus County. University of California Cooperative Extension (UCCE) Sacramento County viticulture and pomology farm advisor Chuck Ingels provided an update on BMSBs, their potential threat, and how to manage them at Clarksburg Grape Day March 1.

Three adult BMSB males and two nymphs were found from June 13 through July 11, 2016 in a trap in a flowering plum tree near a Clarksburg vineyard. No additional BMSBs were found in nearby traps or in foliage searched in nearby landscaping or in the vineyard in 2016. Ingels believes a heat wave at about the same time killed any other BMSBs that may have been in the area. This heat also significantly reduced populations in an established infestation in Sacramento. Ingels told grapegrowers, “If you find one, don’t panic, it can take years for it to reach populations that will cause damage.”

The first known reproducing BMSB population in California was reported in Los Angeles County in 2006. A well-established BMSB population in urban, midtown Sacramento was confirmed in September 2013. Ingels has tracked the BMSB in Sacramento County since 2013 and began trapping in 2014. Confirmed finds have occurred throughout the county, mostly on residential properties, where it has been a nuisance pest and caused damage in landscaping and fruit and nut trees in home gardens. It is commonly found on ornamental and landscape plants such as Tree of Heaven, Chinese pistache, Catalpa, Princess Tree, sycamore, crepe myrtle, maples and elms.

The Sacramento trapping and monitoring program began with traps in the downtown/midtown area, and later expanded south of Sacramento to detect BMSB spread into agricultural areas near the Sacramento River that include the Clarksburg and Lodi grape growing areas. Trapping programs are underway in other California locations including several winegrape production counties.

Based on a map produced in December 2016 by the University of California Riverside Center for Invasive Species Research and the California Department of Food and Agriculture (CDFA) of BMSB distribution in California, the BMSB is established with reproducing populations in nine counties: Siskiyou, Butte, Sutter, Yolo, Sacramento, San Joaquin, Stanislaus, Santa Clara and Los Angeles. It has been detected with at least one find in 21 other California counties, including these grape growing counties: Napa, Solano, Marin, Contra Costa, Alameda, Calaveras, San Mateo, Monterey, San Luis Obispo, Santa Barbara, Merced, Fresno, Kern, Riverside and San Diego.

Ingels believes California crops other than grapes will be at more risk, such as stone fruits (peaches, apricots, cherries); nut tree crops (almonds, pistachios); and pears and apples. Ingels said, “Grapes are not a preferred host for BMSB if other food sources are available, but it will feed on the edges of vineyards and can reproduce in vineyards.” He said risk may be greater in locations bordered by forest or preferred host crops or plant species. In addition, later ripening/harvested grape varieties (mid-September and later) could be harder hit as this coincides with the BMSB’s peak population and migration period. This is based on reports to date in other states. The BMSB has been found in winegrapes in Oregon, Virginia and New Jersey.

Since 2012, BMSB has increasingly been found in winegrape vineyards in Oregon’s Willamette Valley during harvest. Oregon winemakers have recently reported finding dead BMSB in fermenting wines and infestations in winery buildings.

Because the BMSB has been in California more than ten years without causing significant damage, Ingels speculated that it may not become as severe a pest here as in some areas of the country that have more favorable habitat, such as wooded areas near farms and vineyards. In addition, California’s warmer temperatures may be less favorable for the insect to reproduce and build populations. Ingels said, “It’s spreading, but it’s slow.”

Ingels began researching and testing available BMSB traps with pheromone lures in 2014. Traps being used include ground-mounted pyramid “Dead-Inn Traps” from AgBio, Inc., and Rocket Traps from Rescue that are hung in trees or attached to stakes. Pheromone lures have been tested from AgBio, Alpha Scents, Rescue and Trece, with the Rescue lure trapping higher numbers of bugs to date.

In midtown Sacramento, adult BMSBs have been found in traps as early as February, and the first seasonal egg masses have been found as early as April. Egg mass clusters have from 20 to 30 eggs, and most often 28 eggs. Ingels said BMSBs to date have had two generations in this area. Adult BMSBs live from six to eight months. Both males and females go through five nymph instar stages before becoming adults. The BMSB overwinters as an adult, commonly under tree bark, or in or around buildings.

BMSB in North America
The BMSB is a major concern of U.S. agriculture because it has a large host plant range (over 170 species); it feeds on all parts of plants; it lays eggs on anything (plant tissue, structures, wood, metal, plastic); it is easily transported through common activities; and it can be difficult to control. It is also a serious nuisance pest, aggregating in droves in sheltered areas, including homes and buildings.

Native to eastern Asia, the BMSB has been in the U.S. since the 1990s and was first documented in Pennsylvania. As of January 2017, it has been detected in 43 states and four Canadian provinces. The BMSB has been a severe agricultural and nuisance pest in the mid-Atlantic states--from Tennessee and North Carolina in the south and ranging north into New York. It has more recently become an agricultural and nuisance problem in Washington and Oregon.

The bugs can travel long distances by hitching rides in vehicles, and as stowaways when humans move furniture and belongings to different locations. New infestations are commonly found in urban areas. BMSBs migrate seasonally as populations grow and weather warms, commonly in late summer and fall.

Adults and nymphs can damage grape berries, and make clusters more susceptible to rot and other pathogens. The bug has a strong unpleasant odor when disturbed, a concern for the wine industry if bugs find their way into harvest bins. Studies done to evaluate BMSB aroma taints in wine grape juice showed the bugs can add smell described as “crushed cilantro,” “skunky,” “citrusy,” and “piney.” BMSBs contain the aroma compound trans-2-decenal that is the main compound in cilantro.

Studies done by Oregon State University researcher Elizabeth Tomasino found that aroma compounds were reduced significantly during fermentation, so BMSB may not be a problem for white or rose wines because pressing occurs, and BMSBs are removed, prior to fermentation. However, with red wine processing, pressing occurs after fermentation and can increase taint aroma compounds that persist in the wine. Sensory studies of wines made from fruit with BMSB indicate that to be below the consumer threshold for perceiving aroma taint, there should be less than three bugs per cluster in the vineyard.

In season insecticides for BMSB control include pyrethroids such as Brigade and Danitol, and chloronicotinyl group products such as Venom and Belay. Later season products used in Oregon include Aza-direct (azadoractin), Scorpion (dinotefuran) and Pyganic.

Biocontrol with natural predators may be a control option. Endemic predators of BMSB nymphs and adults include assassin bugs, carabid beetles, spiders, predatory stink bugs, and birds. Ants, earwigs and lacewings feed on BMSB eggs. Trissolcus, a parasitoid wasp on BMSB eggs found in Asia that co-evolved with the BMSB in its native habitat, is being evaluated for import and release in the U.S. This wasp parasitoid has also been found in four mid-Atlantic states and Washington and Oregon.

BMSB finds should be reported to the county agricultural commissioner, or a local UCCE farm advisor.
For more information: