A Fresh Look at the Reawakening of an Ancient Wine Land
by Liz Thach
January 19, 2015

Most experts agree that the cradle of winemaking most likely resides somewhere in the Caucasus Mountain region where vitus vinifera grapevines grow naturally in the foothills and valleys. However the exact birth location of winemaking is in some dispute. Various archeological digs point to Georgia, Iran, Armenia, Turkey, and, more recently, Azerbaijan.

Georgia claims to be the oldest wine region in the world due to wine residue found on the inner surfaces of 8000 year old jars in the village of Shulaveri. At the Hajji Firuz site in northern Iran, Dr. Patrick A. McGovern’s team found wine residue in jars from 7,400 years ago, and in Armenia Dr. Gregory Areshian’s team found a complete winemaking operation in a cave dating from 6,100 years ago. More recently, a team of international researchers in the Henan Province of Central China discovered wine residue from 9,000 years ago, but not of vitus vinifera grapes.

Though Azerbaijan does not claim to be the oldest winemaking region in the world, it could be a contender. Indeed Dr. Patrick A. McGovern mentions evidence of grapes and possible winemaking dating to the 7th Millennium BC at Shomu-Tepe in his book Ancient Wine. Shomu-Tepe is located near Tuvuz in the northern region of Azerbaijan near the Georgian border.

Today, with the support of the current government, Azerbaijan is making solid progress in rejuvenating their wine industry. 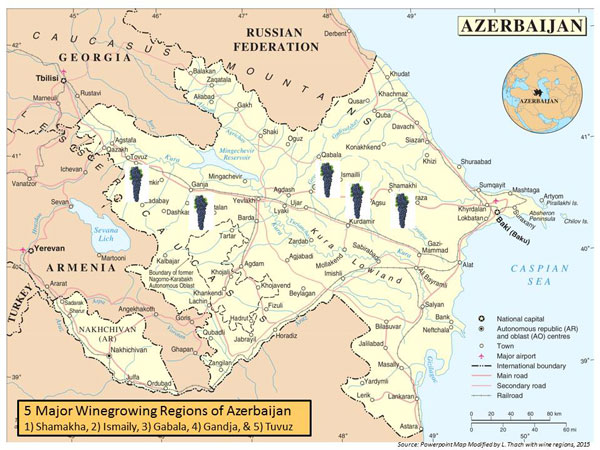 History of Winemaking in Azerbaijan

Azerbaijan, which is located on the Caspian Sea just south of Georgia and east of Armenia, has a long history of winemaking. Through the ages there have been frequent references to its high quality wine by ancient Greek, Arabic, and Roman scholars such as Homer, Herodotus, Al-Masudi and Pliny the Great.

Even with the adoption of Islam, wine continued to be produced in Azerbaijan, and in the 1820’s attracted foreign investment from German immigrants who established operations in the area near Ganja, and ushered in Azerbaijan’s modern winemaking era.

It was only in the 1980’s under Soviet rule that Azerbaijan’s wine industry was halted for a nearly a decade by Mikhail Gorbachev’s edict against drunkenness. In an act similar to America’s Prohibition, thousands of acres of vineyards were destroyed in the USSR. However with the fall of the Soviet Union in 1991, Azerbaijan has slowly been rebuilding its wine industry. Today there are five major winegrowing regions: 1) Shamakha, 2) Ismaily, 3) Gabala, 4) Gandja, & 5) Tuvuz (see map above).

According to the Wine Institute, in 2012 Azerbaijan produced 5 million liters of wine (approximately 555,000 cases), which is quite small compared to nearby Georgia’s 95 million liters in the same year. However, despite being 93% Muslim, Azerbaijan’s per capita wine consumption was 10.24 liters per capita in 2012; very similar to the US at 10.42.

Of the more than 30,000 acres of primarily replanted vineyards, grape varieties include the classics, Chardonnay, Merlot, Syrah, Cabernet Sauvignon and Riesling, as well as traditional varieties such as Matrasa, Saperavi, Rkasiteli, Muscat and many others. Wine styles tend to be slightly sweet, including the reds, though there is a trend towards producing dry wines to pair better with food.

Today there are 17 wineries in Azerbaijan, according to Timur Mamedov, Commercial Director of Aspi Winery, which sells the Savalan wine brand. “The government is now encouraging us to expand our wine industry,” he explained.

Part of this has to do with President Ilham Aliyev’s effort to promote social-economic development in Azerbaijan, which has allowed many industries, including wine, to retrofit old plants. Indeed, the President showed up to officially open the Aspi Winery in Gabala in 2007, which has a production capacity of one million bottles and farms 340 hectares of vineyards in the mountainous region of Gabala.

Yarimada Winery, which means “peninsula” in Azerbaijani, because the winery is located on the Absheron Peninsula, is another example of a newly established winery. “We just opened two years ago,” reported Director, Ibrahim Abdulrahimov, “and we see the wine industry expanding here in the future. With fluctuating oil prices, the government in Azerbaijan realizes we need to diversify.” Yarimada is pursuing a luxury strategy with a focus on high-end wines sold in restaurants and fine wine shops.

According to Euromonitor, some of the largest wineries are Ganja-Sharab Wine Factory and Vinagro–Goygol, the latter of which is headquartered in the plant founded by the Germans in the 1800’s. Common brands found in grocery stores and restaurants of Baku (Azerbaijan’s capital city) include Savalan, Fireland, Caspian Sea, Ivanovka, and Rubai. Currently most wine is consumed in the country or exported to Russia, however several of the wineries are planning to increase export capacity to Europe and the US.

The Future of Azerbaijan Wines

Currently the growth trend for Azerbaijan wine appears to be positive within the country, though increasing at a modest pace. This progress is due to government support, improved wine quality, and a slump in vodka sales. Also, according to Euromonitor, more young and middle aged people in the country are consuming red wine.

Though many may be surprised that a predominately Muslim country produces and consumes wine, one of the cultural aspects Azerbaijan prides itself on is tolerance. Not only are there many Christian churches and Jewish synagogues mixed among the Islam mosques, but there is a wide acceptance of Western clothing with women wearing all of the latest styles, and shops such as Tiffanny’s, Gucci and Zara doing a booming business. The expat community is strong, and the economy, in general, is doing well.

Therefore, it may not be that strange after all that wine from Azerbaijan and other countries can be found in most every restaurant, grocery store and the small wine/liquor shops that are sprinkled throughout Baku. Perhaps, in the future, Azerbaijani wine may also be found on the shelves of other stores around the world. 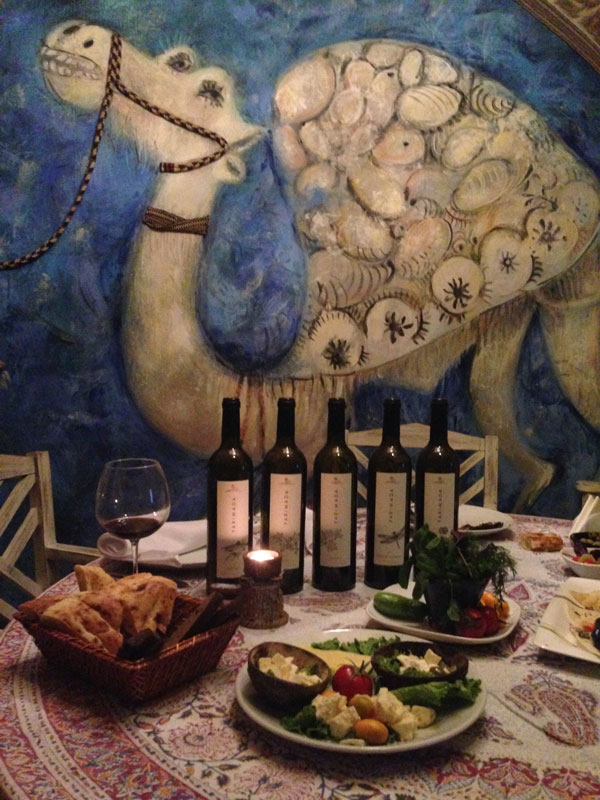 About the Author: Dr. Liz Thach, MW is a Professor of Wine Business & Management at Sonoma State University in California. She has recently returned from a trip to Azerbaijan where she was able to taste some of their wines. She can be contacted at Liz@lizthach.com