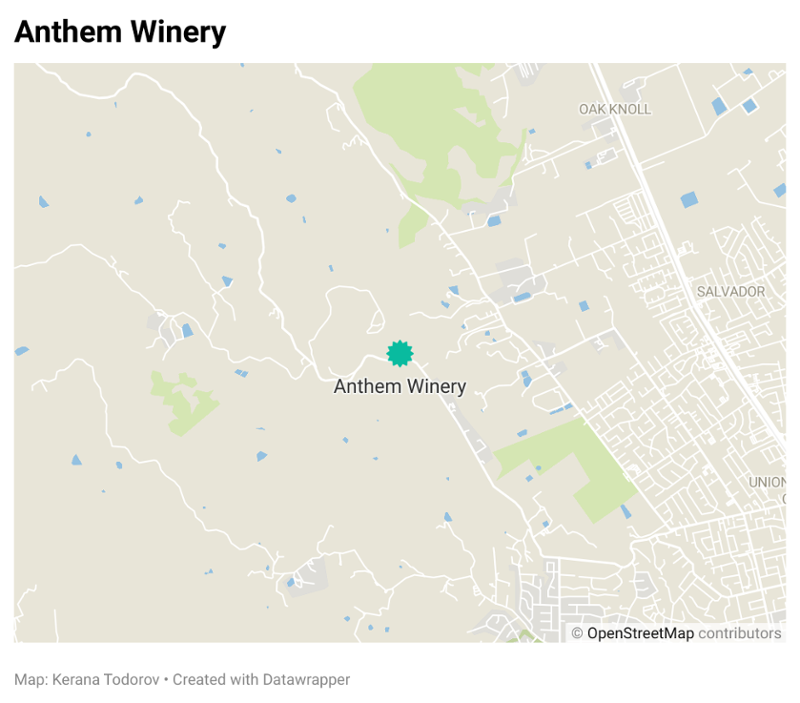 A Napa Valley homeowner has filed a lawsuit against Napa County over its decision to approve major upgrades at the winery next door to his property, including a new entrance near his house.

The plaintiff, Jeff Atlas, seeks to overturn a Napa County decision to allow Anthem Winery and Vineyard LLC to perform major upgrades on its property sandwiched between Redwood Road and Dry Creek Road near the city of Napa, according to the lawsuit.

Anthem Winery owners Justin and Julie Arbuckle acquired the former Jessup Winery in 2009 and an adjacent lot a year later. In January, Anthem Winery, which produces up to 30,000 gallons of wine a year, received a modified use permit to build a new winery facility and set up a visitation program.

One issue raised in the lawsuit is the newly approved entrance road off Dry Creek Road which Atlas alleges is substandard, according to the lawsuit filed Tuesday in Napa County Superior Court.

Atlas contends the narrow residential driveway off Dry Creek Road should not have been approved as a commercial road to and from the winery, according to the complaint. For 18 years, the winery’s permitted commercial access was off Redwood Road.

Altogether the Anthem Winery project approval required 16 exceptions to fire safety standards, according to the complaint. During public hearings, the winery argued that the new road would improve safety in part because it would be wider than the access road off Redwood.

Atlas’ house is about 40 feet from the Dry Creek Road entrance to the winery. The county’s approval, according to the complaint, Atlas’ “property value, repose and quality of life will be substantially diminished by (Anthem Winery’s) traffic on the new entrance road,” according to the lawsuit.

The project was approved in January when the County of Supervisors denied an appeal filed by Atlas and other neighbors. The neighbors were appealing a Planning Commission’s vote in February 2020 to approve the winery’s upgrades. The supervisors’ vote to deny the appeal was 4-1, with Supervisor Diane Dillon casting the dissenting vote.

Anthem Winery received the green light to build a new 10,388 square-foot winery facility, 29,053 square feet of cave as well as the new road, entrance and bridge.

The winery also won permission to host 7,623 visitors annually and organize 23 marketing events, including one for up to 100 guests. The winery had no visitation program until this year.

The January public hearing was postponed for months in part because of the ongoing COVID-19 pandemic and the LNU Lightning Complex Fires, according to a staff report.

“This process has been very difficult,” co-owner Julie Arbuckle told the Board of Supervisors in January

The Arbuckles made a number of concessions before the Planning Commission approved the project, including forgoing a request to boost wine production to 50,000 gallons and agreeing to reduce its proposal to host 15,000 visitors a year.

Julie Arbuckle told the supervisors she was determined to make it work. “Our goal remains to build a family winery that can provide a sustainable plan for our land to remain agricultural and at the same time to support our family and produce extremely high quality wines that enhance the reputation of both the Mt Veeder appellation and Napa Valley as a whole,” Arbuckle said.

The supervisors in January placed two additional conditions on the winery. The winery cannot truck in water and have events during red-flagged days or on days when power is shut off to lower the risk of fires.

The Napa County Planning Commission first considered the proposal in October 2018. The winery submitted its application for its use permit major modification in 2014.