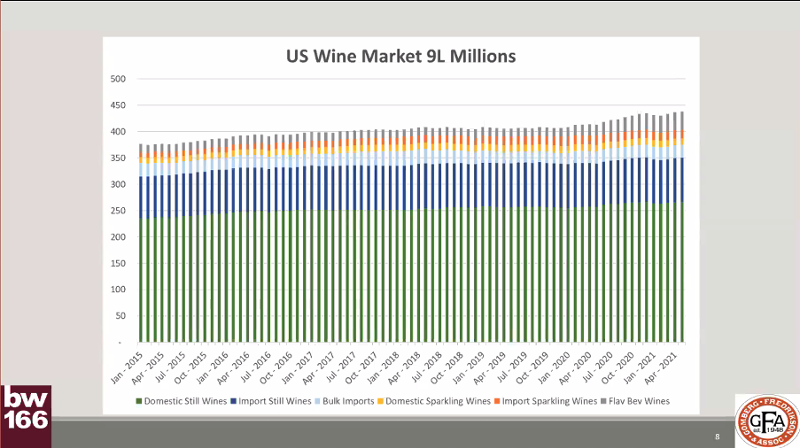 The disruptions of the COVID-19 pandemic have been the story for the past 15 months, but as restrictions lift and something closer to normal returns for the wine industry it has to face a much less dramatic challenge but one that potentially could be far more transformative.

That is declining market share in tandem with a US drinking age population that continues to grow older.

“We need to look at our industry and figure out how to take share going forward especially as there are more headwinds, said Jon Moramarco in a webinar on June 15. “We have to find new tools to drive the entire industry forward.”

Moramarco is the editor of the Gomberg Fredrikson & Associates report as well as managing partner in the market research firm bw166. He said from 1993 to 2016 wine share grew at a rate of 3.4% while the entire total beverage alcohol market grew by 1.2%. This period also saw the total legal drinking age population also grow by 1.2%.

Since then it’s been a very different story, with spirits reclaiming share and most recently enjoying explosive growth from a new generation of canned cocktails. The retail and direct-to-consumer sales surges of the pandemic months obscured the fact that wine’s total market share is slipping away.

As wine loses share, the US drinking age population is essentially flat at a growth rate of 0.6. The market is not getting bigger, so wine needs to figure out how to grow its slice of it. “The reality is the market is only so big and for various reasons I don’t think we’ll see per capita consumption increase,” Moramarco said. “I just don’t see our society moving toward greater per capita consumption.”

Wine needs to connect to younger consumers by developing products that can compete on per-serving cost. A popular retail wine brand at $12 per bottle has a per serving cost of around $2.40 while the leading seltzer brands have a per-cost serving closer to $1.50.

The industry also needs to reclaim mealtime by developing brands that pair well with more diverse cuisine such as Asian, Hispanic or soul food. A Eurocentric focus on food and wine pairing worked during wine’s growth decades but may not be the best fit for younger consumers with far more diverse backgrounds and tastes.

That fight for share will need to take place within the on-premise sector that Moramarco said is still struggling to fully recover and pandemic-induced changes in consumer behavior may make a full recovery even harder.

Moramarco said the data show Americans did not drink more during the pandemic they just shifted their consumption to home. After a year of drinking and eating (and spending comparatively less than in bars and restaurants) an initial rush back out to on-premise may be followed by a new “equilibrium point” between off and on-premise spending that is lower than where the industry was in 2019.

He also used the retail sales of a cohort of high-end Napa Valley wine brands (such as Caymus, Silver Oak, Rombauer, Joseph Phelps and a few others) to further illustrate changes between on- and off-premise. Sales of these wines have been much stronger than the channel overall as consumers seek them out and have also been trading up in price.

The wineries shifted their on-premise allocations into retail and don’t appear to making the move back anytime soon. “The interesting thing to me is I believe these brand owners aren’t counting on restaurants coming back as quickly,” Moramarco said.