A judge had ordered the board to reconsider its approval because of the Atlas Peak Fire.
by Kerana Todorov
May 20, 2021 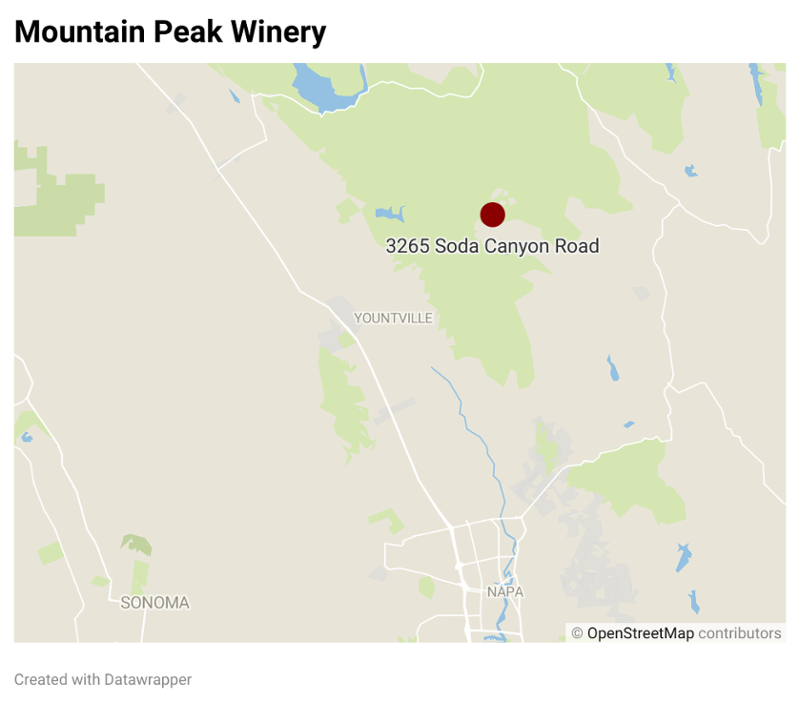 The Napa County Board of Supervisors on Tuesday re-affirmed a 2017 vote to give the green light to a proposed winery on Atlas Peak east of Napa, a project strongly opposed by neighbors. The vote in favor of the future Mountain Peak Winery was 3-2.

A final vote will take place July 13. The resolution will include restriction at the request of Supervisor Brad Wagenknecht – a restriction to visitations to the winery on days when the U.S. Weather Service issues red-flag fire warnings.

The Board of Supervisors originally approved the 100,000-gallon winery at 3265 Soda Canyon Road in August 2017, about two months before the deadly Atlas Peak Fire scorched much of the canyon, forcing harrowing evacuations in the middle of the night along the 6.5-mile dead-end road.

Tuesday’s hearing came after the court ordered the county to re-consider its 2017 vote.

The plans included a 8,000-square foot tasting room and office building, a 6,400 square-foot crush pad and a 33,400 square-foot cave. The winery would be allowed to have up to 60 visitors a day and up to 275 visitors a week. The existing residence would be demolished. Vineyards’ owner, entrepreneur Hua “Eric” Yuan, produces wine with fruit from the 116-acre estate vineyard under the label Acumen.

Neighbors against the winery proposal on Tuesday spoke before the Board of Supervisors about their terrifying experiences fleeing the Atlas Peak Fire during the night of Oct. 8, 2017. They recalled how they found themselves temporarily trapped on Soda Canyon Road when a tree fell across the roadway. Others were rescued by helicopter. Two California Highway Patrol helicopters rescued more than 40 people trapped on Soda Canyon and Atlas Peak roads.

Speaking on behalf of the group opposed to the winery project, Soda Canyon property owner Anthony Arger said among the reasons to deny the project is the “incredible fire danger that has, does and will always exist on Soda Canyon Road.”

“It is not a matter of if, but a matter of when the next big fire will occur,” Arger said. Soda Canyon Road “does not have sufficient capacity to handle existing traffic in the event of a massive evacuation,” Arger said.

A winery representative, Donna Oldford, urged the supervisors to re-affirm their 2017 vote. Soda Canyon is not an unsafe road, she said. People are allowed to rebuild their homes, she said, adding that projects that had been granted entitlement should be allowed to “build responsibly as well.”

“The solution for wildfire is not going to be land use planning on a project-by-project basis. It’s going to be a comprehensive effort with everybody doing what they can to help with the big picture,” Oldford said.

Her client has offered not to have marketing events on red-flagged days and to build an underground water storage bladder near the crush pad of the winery that would contain 80,000 gallons of water and be accessible in case of a fire, Oldford said. There are other sources of water, she noted. The crush pad as a staging area during a fire, she said.

“We’re not going to contain wildfires by just eliminating one winery,” Oldford said. “That winery could make a difference in a helpful way.”

The majority of supervisors said the winery met the regulations. Supervisor Ryan Gregory empathized with the residents who experienced the Atlas Peak Fire but said he would re-affirm his 2017 vote. “I haven’t heard any new evidence that says I got it wrong four years ago,” Gregory said.

Supervisor Alfredo Pedroza, who chairs the board, voted with the majority with Gregory and Wagenknecht, saying he would support’s Wagenknecht’s proposal to limit or restrict visitation on red-flag warning days.

However, supervisors Diane Dillon and Belia Ramos voted against the project. Ramos said her 2017 vote was a “mistake,” given the risks to residents and winery patrons. She cited the road conditions and the area’s location in a very high fire hazard severity zone.

“Given the severity of what happened in 2017, I certainly do not want on my conscience to have to rely upon helicopters saving any of you from the roadway,” Ramos said.

The winery plans to have 19 full-time employees and four seasonal employees.

The developer originally filed the application to build Mountain Peak Winery in September 2013.