by The Oregon Winegrowers Association
February 18, 2021 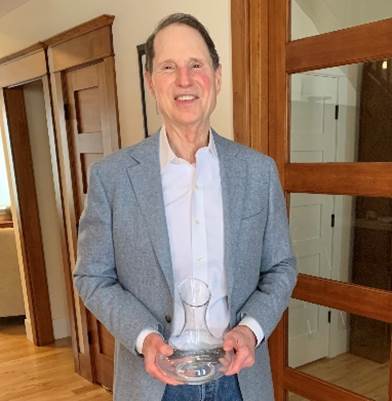 PORTLAND, — The Oregon Winegrowers Association (OWA) has presented U.S. Senator Ron Wyden with the Oregon Wine Leadership Award during its annual membership meeting. The award is given in recognition of outstanding leadership in promoting the Oregon wine industry through public policy initiatives.

Alex Sokol Blosser, OWA President and Co-President and Winemaker at Sokol Blosser Winery in Dayton, presented the award: “Senator Wyden has demonstrated time and again his commitment to supporting Oregon’s home-grown wine industry that is delivering significant economic activity and employment in the state. We are excited to share our appreciation for his tireless support for our growers and wineries, particularly as we face strong headwinds in 2021 and beyond.”

Senator Wyden’s record of supporting the Oregon wine industry is lengthy. In Dec. 2021, Congress made permanent federal excise tax credits for wineries first introduced by Senator Wyden in 2015, recognizing the need to support craft producers during a challenging time. Nearly two-thirds of Congress signed on to co-sponsor his Craft Beverage Modernization and Tax Reform Act. As Chair and Ranking Member of the Senate Finance Committee, he has undertaken efforts to modernize the Alcohol and Tobacco Tax and Trade Bureau (TTB), cutting regulatory red tape and ensuring TTB responsiveness to industry needs. Senator Wyden has called for disaster assistance to aid winegrape growers amid a destructive 2020 wildfire season, having supported disaster funding in prior wildfire years. He has pushed to remove trade barriers to allow American wines to compete in international markets, and supported funding for key Farm Bill programs.

“I’m honored to receive this leadership award from the Oregon’s winegrowers, who have built a world-renowned product that represents the best of Oregon small business and agriculture,” Wyden said. “The teamwork with our state’s winegrowers on trade, taxes, wildfire relief and so many other issues has always proved a great example of the Oregon Way of finding solutions that create good jobs. That has been especially true over the past year with all of its public health and economic challenges. Thank you to the Oregon Winegrowers Association for this award. I very much look forward to continuing our work in the days ahead.”

After years of robust growth, in 2020 economic activity in Oregon related to wine fell more than 20% to $5.7 billion due to the COVID-19 pandemic and devastating wildfire season. Jobs related to the wine industry's presence in Oregon fell 28% to 28,782 with a 23% decrease in wages. The latest figures from 2019 show licensed wineries in Oregon now number 908 with 1,297 vineyards throughout the state.

About the Oregon Winegrowers Association

The Oregon Winegrowers Association advances and protects the investments of its members. Harnessing the power of statewide consensus, the OWA stands as a vital advocate for the health, growth and economic sustainability of Oregon’s wine grape growing and wine production community. The OWA is the established and premier advocacy organization representing all facets of the Oregon wine industry. Visit www.oregonwinegrowers.org for more information.

More news from Oregon Wine Board