Despite Bulk Buying Flurry, Acreage in California Still Needs to Be Pulled to Stay in Balance

It was a tale of uncertainty and hope at Wednesday’s general session at the Unified Wine & Grape Symposium, as industry experts reviewed the past year and projections for the future.

While much of the discussion centered around Covid-19 and sales numbers, an analysis of acreage and the bulk wine and grape market proved to show that the industry still has a long way to go toward balance.

At last year’s general session, Allied Grape Growers president Jeff Bitter caused a stir by bolding pointing out that oversupply in the bulk wine and grape industry was fueled by overplanting, and that to correct this, the industry needed to pull at least 30,000 acres.

While some acres were pulled in 2020, it wasn’t enough to correct the oversupply.

“If we don't experience wine shipment growth coming out of this pandemic and/or we don't reduce our bearing acreage base further, beyond this year, it's not a matter of if we become oversupplied again, it's just a matter of when. We've still got some work to do in terms of the longer term picture in this industry,” said Bitter.

To further the point, about 10 percent of California’s acres are non-bearing, and those 56,000 acres will come into production by 2023. The vast majority of those plantings are Cabernet Sauvignon, Chardonnay and Pinot Noir, which account for around 40,000 of those acres, according to Bitter.

Instead, what saved the market this year were a short crop and wildfires.

“We talked about getting out of this long position—and then of course, the short 2020 crop comes with low yields and wildfires and the issues related to those things,” Bitter said. “And the market is positively affected via this immediate supply fix. So, we got what we were looking for in an immediate decrease in supply, but it wasn't via the avenue that we were advocating as an industry.” 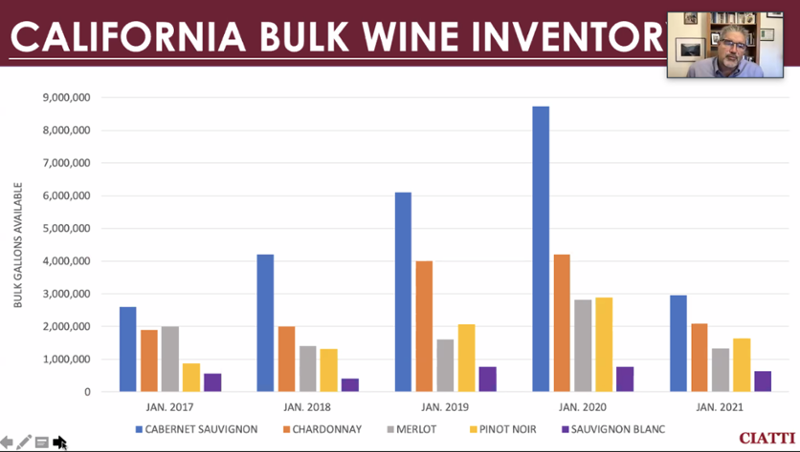 “Without this change in terms of expected tons, I don't think we would have seen the activity we're seeing in the [bulk] market today,” Ciatti partner Glenn Proctor said.

This activity took place during two inflection points, as Proctor put it. The first in April, as big brands, particularly those that benefited from early consumer pantry-stocking controlled the buying activity. These brands turned to excess 2018 and 2019 bulk to fulfill a rather large demand for familiar and widely available brands. At the same time, a number of traditional sellers took their grapes off the market, anticipating a growth to demand. Most of this activity took place with Central Valley grapes.

The second inflection point took place from August to October. Many buyers emerged as the lighter size of the crop became more apparent—and even more from higher-priced brands showed when wildfires began blazing across the state.

All of this resulted in an increase in price. In Napa, one could find Cabernet for less than $20 per gallon in January 2020. Just a year later, that price is closer to $40 per gallon and inventory is low.

Sonoma County Cabernet Sauvignon and Pinot Noir were in high demand, and Proctor even said that Zinfandel and other varieties were popular, as vintners were hit with a short crop and heavy smoke. Pinot Noir pricing doubled, from $14 per gallon to $28. 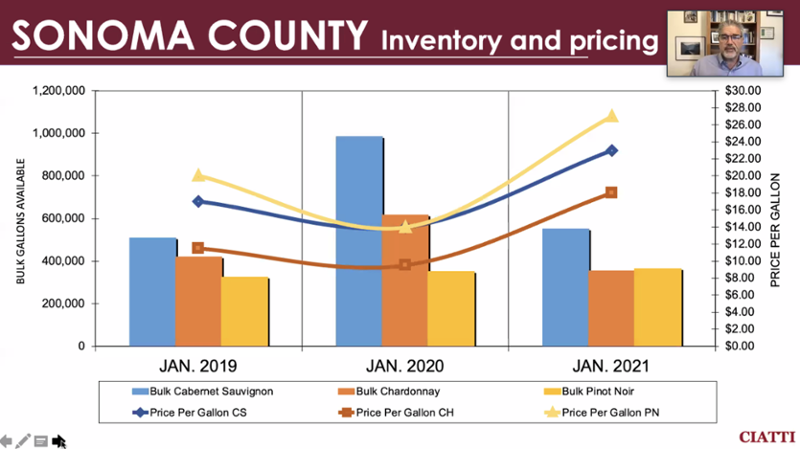 Moving Forward: The Future of Plantings

Both Bitter and Proctor agree that older, less productive vineyards need to come out of the ground. But how much?

“The smaller 2020 crop and limited bulk inventory of wine should move us to a more balanced market, but it's still tenuous. We'll see how it develops,” said Proctor.

Bitter reports that since 2010, California has overplanted by about 20 percent—but that was sustainable at the time. In the early 2010s, wine sales were rising, and plantings were meant to supply that demand. However, that increase in growth slowed, starting in 2015, but plantings continued. Last year was the first year a sizeable amount was pulled out.

“We have this ebb and flow over time of plantings and removals, and you can see that 2020 was a huge removal year,” said Bitter. “Most of that was driven by the Central Coast. We saw huge uptick in removals in the Central Coast last year, some additional acreage removed in the North Valley.”

While it is, of course, too early to tell, Bitter is guessing that we will see fewer removals in 2021 than we did in 2020, about 22,000 acres is his best estimate. The total net loss is 15,000 acres, as about 7,000 non-bearing acres became bearing last year. As a result of this, and new acres coming online, he predicts the bearing acreage trend will stay flat for a time.

It’s a good thing, he says, because we’re in a shorter inventory position overall and that we’re heading into the season in a much better position than the year prior, when grapes were left on the vine due to a lack of buyers. 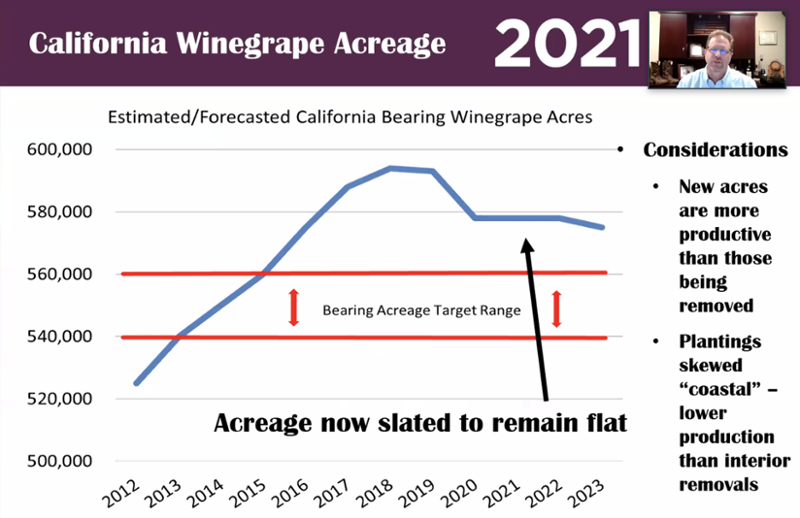 “The conversation becomes more about how we achieve our bearing acreage target range within the next few years to make sure we don't become oversupplied longer-term again,” he said. “The structural oversupply issue that existed a year ago still exists today, but to a lesser degree because we did remove a net 15,000 acres last year. So, we did come off that peak. We did come down, we don't have the risk of oversupply that we did previously, but it's still there.”

This, he is quick to point out, is not a short-term solve. We’re going to feel an oversupply again. When looking at the tons crushed between 2012 and 2019, California averaged about 4 million tons and ended up leaving grapes on the vine in 2019 and starting 2020 off quite long.

“So that tells me very clearly we cannot sustain four million ton crushes on average, over a period of time without going long,” Bitter said. “Based on the acres we have in the ground today and our forecast for yields in the future, we will be back up above four million tons on average, on an ongoing basis in the future. We still need to make those adjustments again, assuming that we don't grow wine shipments, that the wine market doesn't grow.” 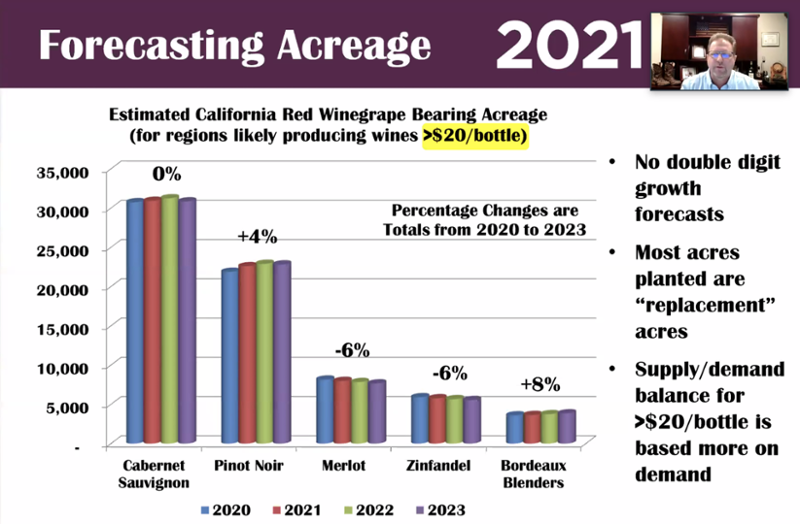