How are Wineries Doing? Are They Interested in Selling?

One of the findings of the 2021 Silicon Valley Bank State of The Industry Report was that wineries have been performing relatively well financially, given the difficulties of the past year. According to the report, premium wineries on average saw sales growth decline 7.1 percent in the first half of 2020 while cost-cutting – a euphemism for layoffs, helped offset losses so that, on average, wineries in the data sample turned a small profit.

The chart below from SVB’s survey of premium wineries isn’t in the report but was discussed during the second installment of the SVB videocast. 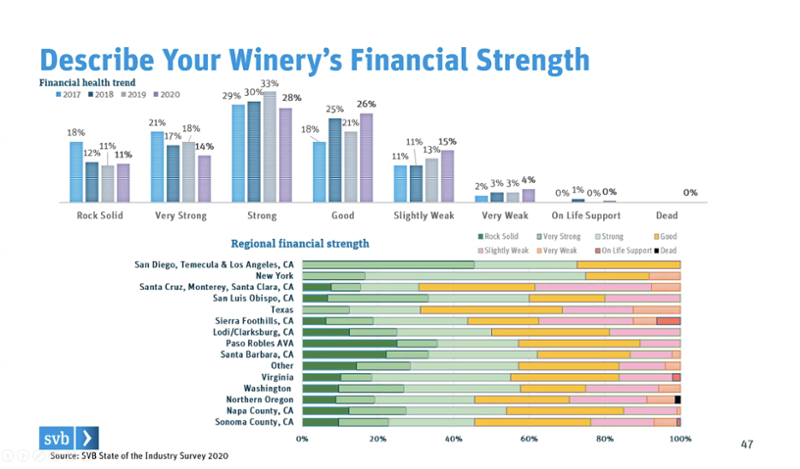 It’s self-reported data reflecting people’s perceptions. Wineries are admitting their financial strength is declining, with fewer “rock solid” and “very strong” wineries and more “slightly weak and “very weak” wineries this year. Wineries are performing differently depending on how stable they were going into the Covid 19 lockdowns and how they’ve been able to adjust.

Still, 79 percent of wineries are saying their financial strength is good to rock solid.  “It doesn’t entirely jibe with what my perception is,” Erik McLaughlin, the CEO of M&A advisory firm Metis said during the videocast. “I don’t have 79 percent of the people walking through my door feeling ‘good’ to ‘rock solid,’ - it might be more like 50 percent – I don’t know if this is projection or people wanting to see themselves this way.”

The chart below reflects winery interest in selling for a fair price and nearly half (46.5 percent) either consider selling to be a possibility, something they’d seriously consider, or consider selling likely. 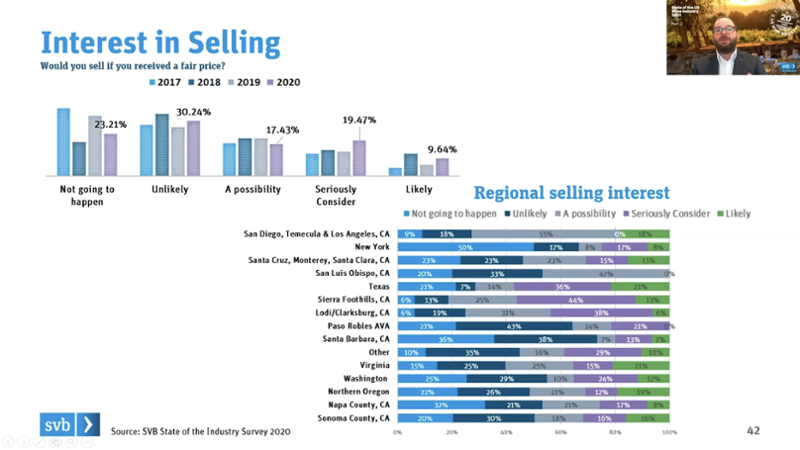 “I often get comments from people who say, ‘I’ll bet this is really good for your business, now everyone wants to sell because there’s distress in the market.’” McLaughlin said. “What we’re actually seeing from winery owners is a more sobering understanding of where they really stand, and a realism.”

While some wine businesses are very profitable, McLaughlin is seeing more situations where the value of a wine business doesn’t outpace the underlying value of its assets.

The M&A market remains fairly active, he said. “It’s a game of musical chairs and there are more chairs and more people going around the circle, but we’re not necessarily seeing a bunch more people grabbing chairs.”

McLaughlin expects to see more discounted asset sales associated with wineries not doing well and other deals with fair valuations for strong businesses.

“The difficulty will be for the businesses that are in the middle.”

McLaughlin said more institutional investors and private equity funds with capital to deploy are looking at the wine market and starting to make sense of it, not because the wine industry’s financial performance is improving, but because there’s "too much money looking for places" to invest.

Silicon Valley Bank is a public bank in the top 30 by size in the US. (SIVB) The Wine Division has over 35 experts focused on the family premium wine and vineyard space on the US west coast. learn more