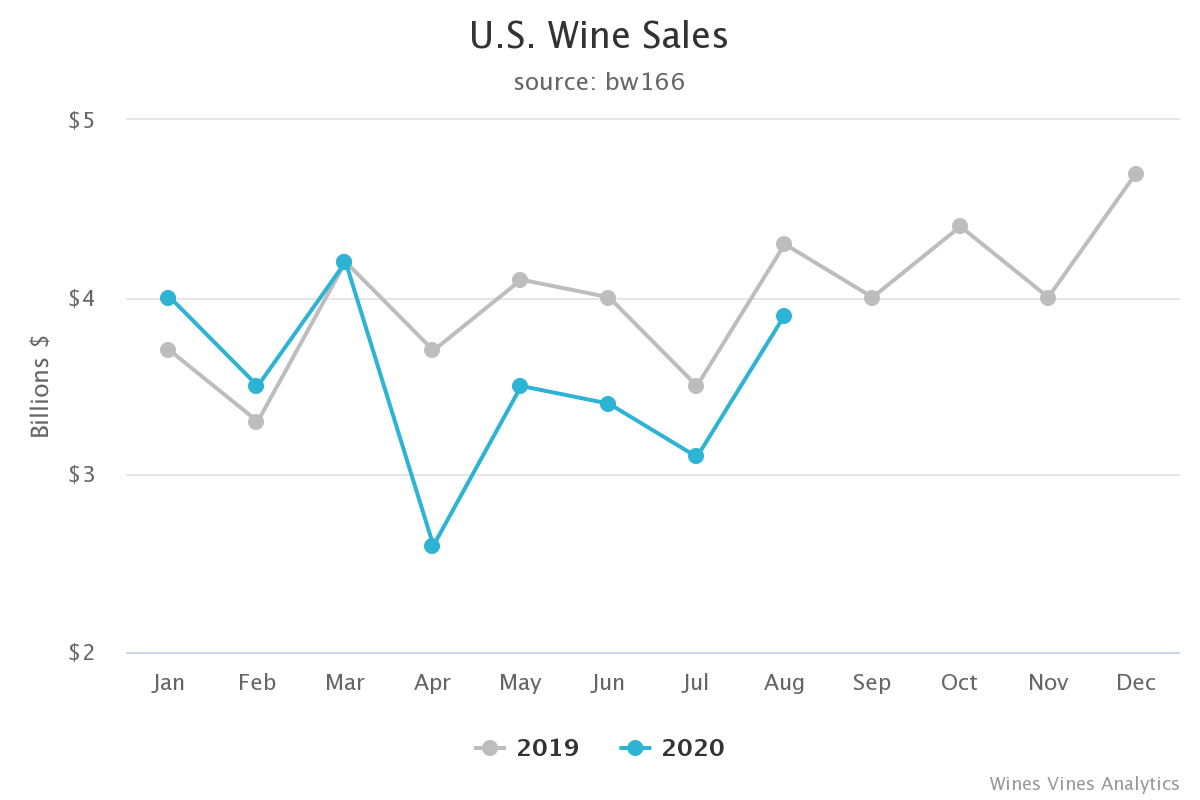 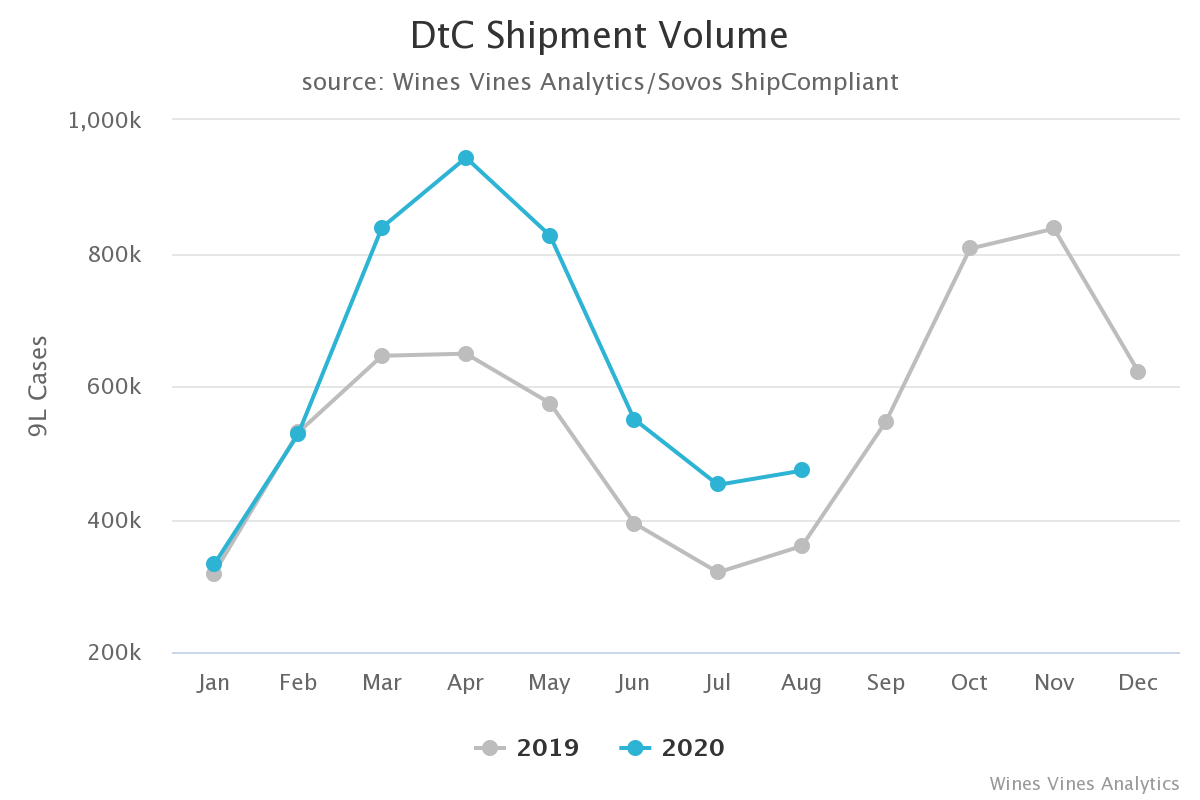 Sonoma, Calif.— Consumer spending on domestic wines totaled $49 billion in the 12 months ended August, according to market research firm bw166, a decline of 3% driven entirely by lower sales at restaurants and other on-premise accounts. Sales in August alone came to $3.9 billion.

Table wines drove the decrease as spending in the period fell 4% versus a year ago to less than $45 billion. Channel shifting led to a 2% increase in sparkling wine sales, which totaled $2.1 billion and helped offset the decline in table wine sales. Bulk imports also increased, rising 8% to $1.6 billion.

The declines through on-premise reduced the total value of the wine market in the U.S. in the latest 12 months by 5%, to $70.9 billion.

Despite the shifts, several channels continued to post significant gains, according to data published in the September edition of the Wine Analytics Report (https://wineanalyticsreport.com/report/wholesale-wine-market/).

Off-premise sales of domestic table and sparkling wines tracked by Nielsen account for 23% of the market’s value. These topped $923 million in the four weeks ended Aug. 8, an 18% increase versus a year ago. Volume in the period increased 11% to 9.8 million cases.

While the growth rate was off the highs seen earlier in the COVID-19 pandemic, a significant shift was apparent as consumers opted for more expensive options. Value wines — those priced less than $4 a bottle — saw declining sales in the period, while all other price segments showed growth. Wines selling for $25-plus a bottle saw the strongest growth in the latest four weeks at 39%.

Similarly, Wines Vines Analytics/Sovos ShipCompliant reported that the value of DtC shipments in August was 29% higher than a year ago at $177.5 million. While shipments usually moderate in the summer, the ongoing strength of online orders from consumers new to the channel or those shifting their wine buying from tasting rooms and restaurants has kept more wine moving.

Strong sales have benefitted Cabernet Sauvignon, which remains the most popular varietal through both Nielsen outlets and the DtC channel.

Nielsen scan data tracked $3 billion worth of sales in the 52 weeks ended Aug. 8, giving the grape a 19% share of the channel by value. Sales increased 12% from a year ago, while average bottle price increased 3% versus a year ago to $9.32.

It’s a slightly different story with DtC shipments. Wineries shipped an additional 4% worth of Cabernet Sauvignon in the 12 months ended August compared to the previous year, but the greatest growth was seen at lower price tiers. Shipments of $100-plus bottles were flat at $530 million, while wines priced at $20 to $39.99 saw the fastest growth at 26% as well as the greatest gain in value, adding $16.8 million to total $82.5 million.

The noble variety’s reputation is such that many wineries targeting a higher price point incorporate it among their offerings. There are now 3,300 wineries producing wine with an average bottle price above $20 that make Cabernet Sauvignon, an increase of 21% over the last five years. The price band with the greatest number of producers is $25-$29.99, with 678 wineries, but the greatest growth in wineries producing Cabernet Sauvignon was in the $100-plus price segment, according to Wines Vines Analytics’ new multi-segment analytical database (https://winesvinesanalytics.com/winerydatabases/).

With the end of summer, winery hiring reflected a seasonal slowdown. Winejobs.com’s Winery Job Index was down 37% from a year ago in August, with demand for all roles except the small subcategory of finance posting double-digit drops. The index closed the month at 251.

06/03/21
How Hiring Managers Are Getting Employees in the Door in 2021
05/18/21
Winery Hiring Surges as Reopening Begins
03/09/21
Increase in Hiring by Wineries May Indicate Optimism for Coming Months
11/25/20
Winery Hiring in a Virtual World
11/03/20
Winejobs.com HR SUMMIT to Cover Recruiting, Resilience and the State of the Wine Business
09/29/20
Save the Date for the Virtual Winejobs.com HR SUMMIT
08/18/20
Off-premise, DtC Provide Positive Wine Sales Growth
06/16/20
DtC, Off-Premise Sales Buoy U.S. Wine Market
04/16/20
Winery Hiring Pauses but Sales Rise
09/05/19
How you manage your time only matters if you also manage your attention