Retailers Expect Wine E-commerce to be a New Normal 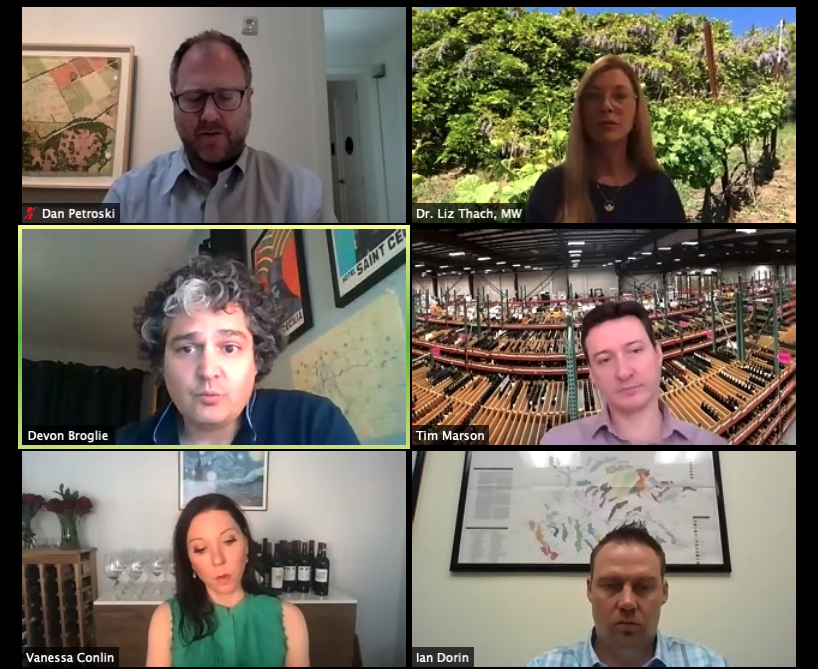 The COVID-19 crisis appears to have accelerated the shift of U.S. wine consumers to online buying, and several of the nation’s top retailers expect wine buyers to stay online.

That was one consensus reached during an online forum of retailers organized via Zoom by Dan Petroski who is the winemaker at Napa Valley’s Larkmead winery.

All reported the weeks of the height of the pandemic-induced lockdown produced a sales surge the likes of which they had only previously seen during the peak of the holiday buying season or as people stocked up in preparation for a hurricane.

Now that several states and cities have begun a gradual re-opening, they expected many consumers to continue online shopping as they perceive it to be safer than a store visit or because they have found it easier and more enjoyable. “We’re pretty bullish the customers buying online now are going to continue to do so in the future,” said the senior buyer at Wine.com, Tim Marson MW.

Based on a survey of new customers to Wine.com, 88% said they planned to keep buying wine online and they also reported a high rate of satisfaction with the experience. “That’s huge for online retail in general,” Marson said. “That means new customers have enjoyed the experience.”

Ian Dorin, director of retail operations at Zachy’s, noted that health concerns will likely keep many consumers staying home even as restaurants continue to open across the country. As those consumers continue to buy wine online it could lead to a sustained change in the world of wine retail.

Dorin said where Zachy’s is based some schools closed and shelter-in-place orders took effect in late February, meaning they saw the crisis sales surge first. “We had a panic buy that you wouldn’t believe, for two straight weeks it was like Christmas every day.”

The surge and resulting massive uptick in web orders and curbside pickup put tremendous demands on the company’s warehouses that also had to be reorganized to ensure all workers were at a safe distance. But the payoff has been some of the best weeks of business in the company’s 75-year history.

WineAccess’ head of wine, Vanessa Conlin MW, said she expects people to interact with wine online more in the future as Zoom happy hours may continue and other wine tasting events are held in virtual forums.

Conlin said the pandemic underscored the importance of a winery maintaining multiple sales channels. While Wine Access is interested in working with wineries that were not in e-commerce prior to COVID-19, it has not shifted from its strategy of seeking wines that meet the company’s standards for quality, have a strong price-to-quality ratio and “have a great story.”

She said for wineries that had primarily been in restaurants, the internet does provide a new venue for that “tableside” sell. Consumers have also grown much more comfortable with engaging with online content, particularly video. “There’s a lot of opportunity for people to think out of the box for those who have only played in restaurants,” she said.

Devon Broglie MS, global beverage buyer for Whole Foods, is based in Austin, Texas and likened the initial weeks of the pandemic lockdowns to what is similarly seen during the approach of a hurricane. In that initial rush to buy, customers did stock up on their usual brands but in the subsequent weeks he said customers began to buy higher-priced wines.

Broglie said it appears people shifted some of what they used to spend on wine in restaurants to the retail channel. More recently, consumers are buying their regular brands online while exploring new ones during in-store shopping trips. “They’re experimenting quite a bit with bottles at all price points,” he said, even as the length of their store visit has become much shorter.

While he personally can’t wait for restaurants to get back to normal, Broglie said he hopes consumers have experienced some newfound joy in cooking and drinking premium wines at home. For wineries, Broglie said the crisis has accelerated changes in the market and it has become even more important for them to “be their own advocates” and not rely on someone else to connect them with a consumer. “You need to have that story and be ready to tell it,” he said.

That was the panelists’ biggest piece of advice for wineries trying to navigate the new wine market: be proactive, “connect the dots” and make it easy for the consumer to find and buy your wine.

And while everyone on the panel also said the saw significant sales of lower priced wines, premium brands have also done exceptionally well recently. All reported the average bottle price per sale has dropped but that is because of the large volume of wine sold overall. Higher priced wines are selling just as well, if not better, as prior to the pandemic.

Marson said Wine.com was on track to do about $150 million in total sales it its 2019 fiscal year ended March. The last two weeks of March, however, tacked on an additional roughly $15 million and had a “massive impact on our growth curve.”

He said mobile device orders were up by nearly 30% helped by orders from younger consumers who accounted for about a third of total sales value growth. “They’re actually buying fewer bottles but spending more.”

While sales growth has been led by white wines at lower prices, sales of wines priced $100 and more were very strong in April and Champagne is also continuing to sell well.

Daily business through the website grew to more than $1 million and spirits was a huge part of that growth. While Wine.com can only sell liquor to California, New York, New Jersey and Florida spirits now account for 15% of total sales in those states.

Conlin, with WineAccess, also reported strong sales at the high end with wines priced $50 nearly doubling in business and sales of wines priced $300 and more seeing the biggest gains.

Petroski has organized regular salons at Larkmead since 2017 with an initial session on the future of Cabernet Sauvignon. The sessions focused on climate change in 2019 and were to explore the future of wine in 2020 but instead went virtual and have focused on effects of the COVID-19 crisis. The session held May 28 was the second of a planned five-part series.