Masks To Be Made Available to California Ag Workers, Including Vineyard Workers, During Wildfires

Winegrape growers have to make disposable masks available to vineyard workers to protect them from harmful wildfire smoke, according to an emergency rule approved recently.

The new rule was among the changes Miiller presented Friday before dozens of growers gathered for the 2019 Annual Sustainable Winegrowing Field Day near Santa Rosa. The Sonoma County Winegrowers sponsored the event which also included discussions of mechanization, storytelling, and research on precision viticulture.

The regulation the California’s Occupational Safety and Health Standards Board approved on July 18 protects all workers exposed to wildfire smoke. The Office of Administrative Law has 10 days to approve or reject the decision, Miiller said.

“My guess it will probably take effect the first week of August,” Miiller said.

He anticipates the regulation will become permanent. The emergency regulation is in place for one year. However, authorities have six months to pass a permanent regulation and Miiller expects the new rule to do so. “This regulation is not going away,” Miiller said. 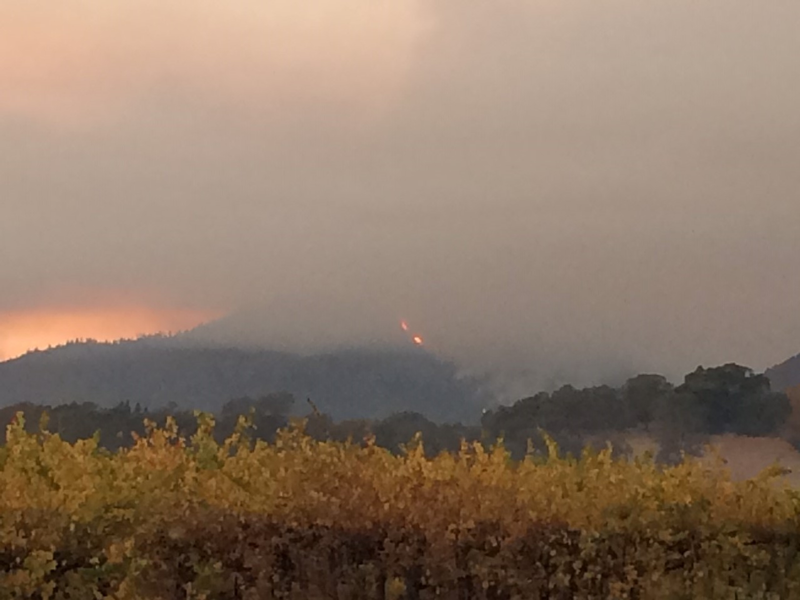 The Wine Country fires in October 2017 blanketed the region with smoke. A new state rule expected to become effect later this week requires growers and other agricultural employers to have disposable N-95 masks avaiable for their field workers. File photo by Kerana Todorov/Wine Business Monthly.

Growers have to encourage workers to wear their N-95 masks in the field when the air quality index is 151 or above and when the smoke comes from a wildfire. “It has to be both,” Miiller said. He recommends checking with AirNow – airnow.gov - to monitor the air quality index. “If it’s over 500, shut down everything,” Miiller said. The workers are not required to wear the N-95 masks during a wildfire, under the rule. The employers have to provide information on how to put on the respirators. However, no fit testing or medical evaluations are required, according to Miiller’s presentation. The rule applies to the employers who pay the workers’ wages, Miiller said.

Worksafe, a nonprofit organization that promotes workers safety, was among the group that petitioned California’s Occupational Safety and Health Standards Board to adopt the emergency rule.

“Employers are obligated to assess occupational hazards and provide their workers with adequate protections, but during the 2017 and 2018 wildfires we saw that some employers were unprepared or unwilling to address employee concerns about smoke,” Worksafe senior stat attorney Nicole Marquez said in a July 18 written statement. “Today’s decision affirms that affected workers, including low-income and immigrant workers, should not have to rely on personal resources or volunteer charity to get the protective equipment they need.”

State legislature also has considered a bill to ban Glyphosate from being applied on public property such as levees. The bill failed but Miiller said the issue is not going away, he said. “Litigation is causing huge problems in the regulatory world,” Miiller said. There is the public perception of what the product does and there is science, he said. “Politicians pay a great deal of attention to public perception,” Miiller said.

There is also a pending regulation on lighting in the fields at night to make sure agricultural workers work under safe conditions. The proposal may require areas as large as a football field to be lit at night, according to Miiller. The wording of the proposal is being reviewed.