Free Flow Wines, the company known for filling kegs with fine wine to allow restaurants and other businesses to serve wine by the glass, celebrated its 10th anniversary this year with changes at its production facility and on its staff.

Free Flow Wines co-founder Jordan Kivelstadt, who presented on Thursday the company’s annual “Keggy” Awards to honor companies and individuals who use and distribute Free Flow’s kegs, will no longer run the company as the top day-to-day executive.

“Jordan is not going to be actively working day to day with Free Flow,” Rich Bouwer, chief operating officer, said during Thursday’s ceremony at Sebastiani Vineyards and Winery in Sonoma. Kivelstadt, who is known for working 24/7, will join the board full time and work on other entrepreneurial projects, Bouwer told about 100 guests and staff members.

“We’re going to miss him tremendously. Jordan really invented this wine-one-tap space and grew our company from nothing but a concept to where we are today,” Bouwer said during his remarks, which ended with a standing ovation for Kivelstadt. 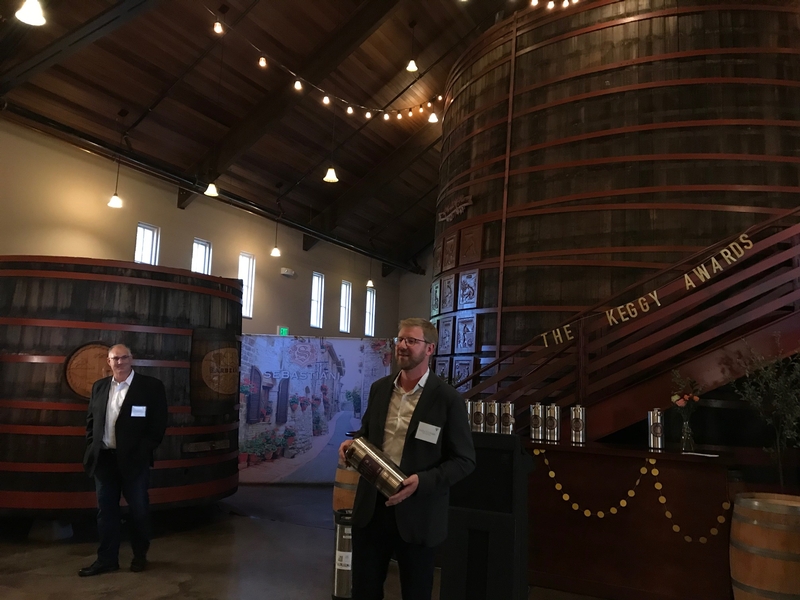 Rich Bouwer, (on left) chief operating officer at Free Flow, and co-founder Jordan Kivelstadt (on right) address guests gathered Thursday at Sebastiani Vineyards and Winery for the Keggy awards.Kivelstadt is stepping back from daily operations and will join Free Flow's board of directors. Kerana Todorov/Wine Business Monthly

During the ceremony, Kivelstadt recalled the history of Free Flow. The company started in a 2,500-square-foot building in Sonoma and has occupied larger buildings as it grew. Its production facility moved earlier this year from Napa into a 58,000-square foot building in Sonoma, a $10 million investment.

The company set a new record this year by filling 21,000 kegs in one month, Kivelstadt said. “That’s a lot of kegs!” he said. “We’ve saved 23 million bottles from the trash cans. The vast majority of glass doesn’t make it to the recycling plant. It actually ends up in the landfill.”

The company, which fills more than 370 wines in kegs, has branched out, installing beer and wine systems and building its canning business. Its clients include more than 150 wineries and 270 distributors. It also operates a filling facility in Bayonne, New Jersey.

“We think this category is going to explode,” said Bouwer, referring to wine canning, during a tour of the facility.