Record Crop for the Lodi Region 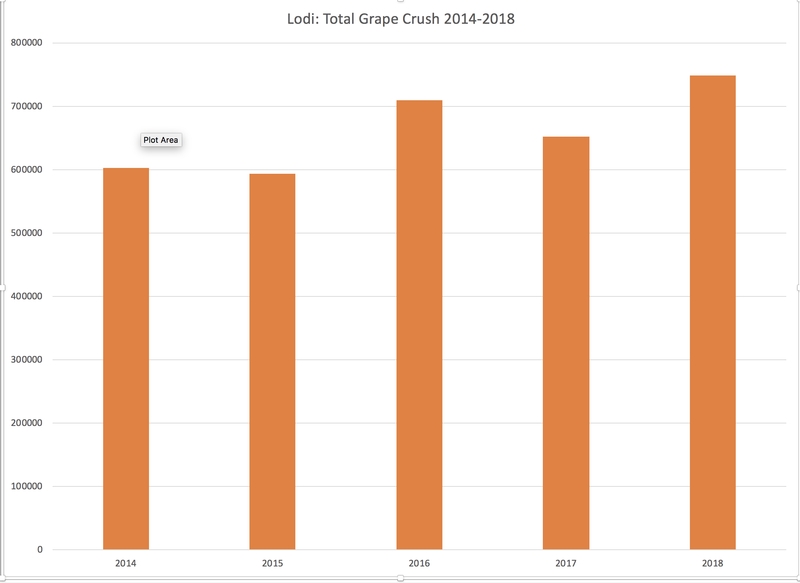 Lodi is among the wine grape growing regions that reported a record-breaking harvest in 2018.

The record-breaking 2018 crush was driven primarily by the Central Coast and the Northern Interior, according to analysts. Lodi farmers crushed 850,687 tons of wine grapes in 2018 – or about 14.4 percent more than in 2017.

“That is definitely a record crop for the Lodi region,” Amy Blagg, executive director, Lodi District Grape Growers Association, said Wednesday as she checked the annual California grape crush report on her phone in Sacramento. She and other members of the California Association of Winegrape Growers were in the state capital to receive updates on pending legislations and meet with state legislators.

The California Agricultural Statistics Service, which released the annual report on Wednesday, reported that more than 4.28 million tons of wine grapes were crushed statewide in 2018. Statewide, that’s 7 percent more than in 2017 and the most since the 4.2 million crushed in 2013.

Jeff Bitter, Allied Grape Growers president, and others, said the 2018 crush came in slightly lower than predicted. That’s a pleasant surprise because of the slowdown in premium wine shipments, he said.

Blagg attributed Lodi’s crop size in part to vineyards coming into full production in the region. Growers at this point do not see demand keep up with the growth. “So, it’s a concern,” Blagg said.

Prices have softened in Lodi, with the weighted average grower return to $586 per ton, according to the Lodi District Grape Growers Association.

According to Turrentine Brokerage, prices have softened by 2 percent for Chardonnay and 5 percent for Cabernet Sauvignon because of slowing sales and increase production.

Erica Moyer, broker and partner at Turrentine Brokerage, said about 900 vineyard acres have been pulled in the Lodi region since harvest as the demand for Zinfandel has softened and prices decline. She expects more acres to be pulled this year.

On a positive note, about 99 percent of all vineyards acres were planted under contract, Moyer said. That brings stability. Also, Lodi also produces great quality wines at a good value, Moyer said.

About 578,453 tons were crushed in 2018 in the Central Coast – or nearly 7 percent more than in 2017. That represents 6.2 million gallons of wine, according to Turrentine Brokerage. Paso Robles’ Cabernet Sauvignon’s crop increased by 13 percent, to 90,508 tons, according to the brokerage firm. The growth is attributed to a “good growing season” and, more importantly, to newly bearing vineyard acres, according to Turrentine.

The weighted tonnage reported from the Central Coast does not include the tons of fruit that were not harvested in 2018 because of the size of the crop exceeding demand, according to Turrentine.

Ciatti partner Glenn Proctor said the oversupply issue is not just in Lodi. Both Pinot Noir and Cabernet Sauvignon have been planted in a number of areas in the last few years, he said.

“As sales have slowed coupled with a large 2018 crop, we see more than adequate supply in many regions of the state. A lot will depend on how case good sales growth looks over the next 12 months and also how big the 2019 crop looks,” Proctor said.

The California Agricultural Statistics Service did not release a preliminary grape crush report for 2018 earlier this year because of the partial federal government shutdown.