Victoria, British Columbia – A significant new viticulture research project on Vancouver Island is boosting the tiny region’s sense of self, but the results could help growers across British Columbia understand how their vines will respond to climate variation.

The two-year project focuses on measuring and managing the parameters of physiological ripeness of Pinot Gris, the most widely planted white wine grape in B.C. The work is supported with an $82,500 (Cad.) grant from the Investment Agriculture Foundation of B.C., which said “the project seeks to maximize grape quality and ensure growers are in the best position possible to leverage that quality.”

The impacts of management practices on grape quality in B.C. are not well understood, said John Volpe, an associate professor in the School of Environmental Studies at the University of Victoria and principal researcher on the project, which is administered by the Wine Islands Growers Association. WIGA represents wineries on Vancouver Island and the Gulf Islands, which together have 44 licensed wineries with 526 acres of vineyard.

“Standard operating procedures across the wineries are surprisingly diverse. Different vineyard managers deploy a diversity of techniques, each very much convinced they’re right,” he said. “This is the first project of what will be many more in the future to actually bring data to support, or refute assumptions.”

Wine grape production was first explored on Vancouver Island in he 1980s, when approximately 48 varieties were planted in 1983 and 1987 as part of what was known as the Duncan project.

Climate has always been an issue, however. The harsh winter of 1985-1986 finished the trial plantings of Chardonnay and Riesling, and Volpe said a short growing season that yields just 1,100 growing degree days means many growers are happy just to have grapes achieve an acceptable sugar level.

“[The] issues around ripeness tend to be framed by what is possible, as opposed to, in warmer regions of the world, trying to mitigate over-ripeness,” he said. “The assumption has always been that we on the island and, for the most part, in British Columbia, never reach that peak physiological ripeness or enter into an areas of decline. We never have the opportunity. But that is changing, literally, with climate change.”

Working with three vineyards in the Cowichan Valley, Volpe – who is also engaged in research related to the effects of climate change on vineyards in France and Portugal – is examining how canopy thinning and kaolin clay applications affect the pace of grape maturity, physiological ripeness and fruit quality.

The harvested fruit was frozen pending analysis at the University of Victoria’s mass spectrometry facility, including with a gas chromatograph. The technology allows molecular level analysis of the fruit to understand how vineyard management can influences flavor components that manifest during fermentation, without the need to make wine.

“We’re going right to the root, if you will, of the flavor chemistry and we’re also eliminating a major contributor to variance, which is the dynamics that happen in the winery,” Volpe said. “We hope to have the numbers completely in the can within the next couple of weeks.”

Statistical analysis will follow, with initial results ready for presentation by spring. 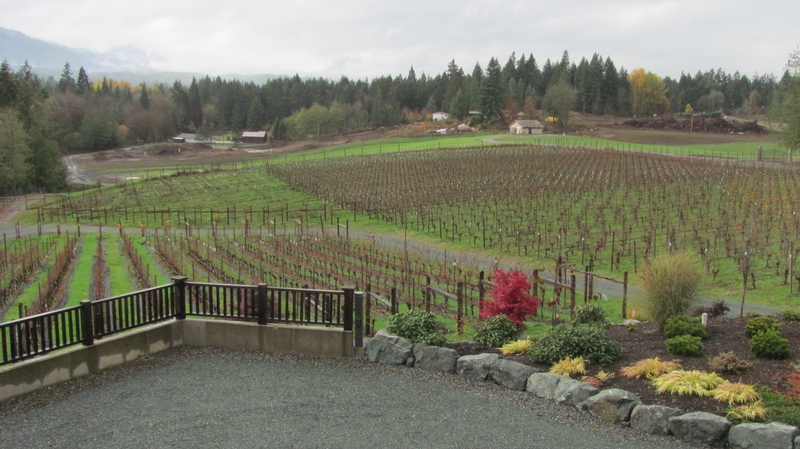 Blue Grouse in November; The upper right shows an area being cleared for future vineyard development. Photo by Peter Mitham

Bailey Williamson, winemaker at Blue Grouse Estate Winery south of Duncan, said the results give both existing and future growers valuable information they haven’t had in the past.

“The primary benefit of John’s research is to tease out how the climate intersects with grape quality,” he said. “For some of the people getting into the game that don’t have as much of a history, I think that would be very beneficial for them, and I think it would also provide perhaps more impetus for others to get into the wine industry here. … It will certainly give credibility to what we’re doing.”

The research is also important for the Cowichan area specifically because climate is a defining factor in the region, which is set to apply later this month for recognition as a geographic indication within the larger Vancouver Island indication. Williamson has played a leading role in the application’s development, working in conjunction with soil scientist Scott Smith, who has been working on many of the sub-appellation applications that followed from the work of the BC Wine Appellation Task Group struck in 2015.

“The island is a completely separate entity geologically to the rest of the North America,” Williamson said. “But … it’s the climate that’s associated with our geographic location that probably has a greater impact on the ability to grow grapes, the ripening of grapes, and what does phenolic ripeness mean for us.”

Volpe and Williamson both say the project signals that Vancouver Island producers are serious about improving the quality of its grapes and wine.

“What I’m hoping [is] at the end of the day all the initiatives come together and paint a picture that the island has now got a critical mass of wineries making quality wine that deserves recognition, that deserves a bit more research,” Williamson said. “It’s our time to stand up and wave the flag.”