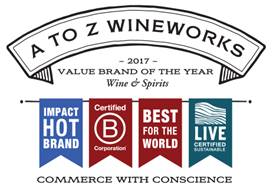 Oregon’s A to Z Wineworks has once again earned the Impact ‘Hot Brand’ award, a designation awarded to wine brands which deplete more than 250,000 cases while consistently growing at double-digits. A to Z is now a back-to-back ‘Hot Brand’ award winner, having become the first Oregon winery to earn the distinction in 2017.

2017 was a landmark year for the state’s top-selling wine brand. For their fifteenth anniversary, A to Z hosted more than 400 members of the trade in August. Two new wines were launched for the celebration: The Essence of Oregon Pinot Noir and A to Z Wineworks Bubbles Rosé. The two new wines were well-received along with considerable growth in 2017 for the A to Z white wines, including depletion gains above 25% by both A to Z Pinot Gris and A to Z Riesling.

“We appreciate our distributor support and sustained public demand which contribute to our continued growth. We take special pride in being an independently held Impact ‘Hot Brand’,” stated Ron Mertz, President of National Sales. “By maintaining disciplined focus on our key offerings and increasing our investment in awareness-driving marketing, we are building a brand for the long haul.”

Deb Hatcher, A to Z Wineworks’ co-founder, reflected that “this award is all the more meaningful as we continue to manage according to our values and honor our commitment to the ‘triple bottom line’ of people, planet, and profits. To once again be recognized as a ‘Best for the World’ B Corporation and an Impact ‘Hot Brand’ in the same year is truly gratifying.”

A to Z Wineworks President Amy Prosenjak and Ron Mertz will accept the award at the 75th Annual Wine & Spirits Wholesalers of America Convention at Caesar’s Palace in Las Vegas on Tuesday, May 1st.

About A to Z

A to Z Wineworks offers “The Essence of Oregon” by sourcing from vineyards across the state and carefully blending wines true to their variety. 100% Oregon sourced and based, A to Z sets the standard for cool climate, food-enhancing Pinot Noir, Pinot Gris and Chardonnay. In 2014, A to Z Wineworks became a certified B Corporation, and has been recognized as a ‘Best for the World’ company every year since.

More news from A To Z Wineworks

A To Z Wineworks