Weather and Climate Summary and Forecast

The ridge pattern that brought drier and warmer conditions from December through most of February to the western US has shifted west and south allowing for a return of winter. Welcomed rain and snow has helped lower drought conditions but not enough to make up the dry winter so far. Cooler conditions have also slowed spring growth.
Short term forecasts call for more late winter, early spring rains and snowpack additions at least through the third week of the month. Temperatures are expected to stay cooler than average over the majority of the western US for the rest of the month.
The spring seasonal forecast (March through May) continues to be dominated by the pattern expected by the La Niña in the tropics and cold PDO conditions in the North Pacific. From these conditions, the forecast continues to tilt the odds to spring being cool/wet in the PNW and average to warmer than average and dry in California. While March will likely help the water year accumulation, the odds of making up the current precipitation deficits decline rapidly this time of year and large areas of the west are likely to see drought conditions develop or get worse in the coming months.

The ridge pattern that brought very dry and mostly warm conditions during December through late February shifted west and south in late February. However, the month still ended up being relative warm and dry in the west (Figure 1). California saw temperatures that ranged mostly from average to 2°F above average which extended eastward throughout the southern Rockies and desert SW. The PNW saw a near average to cooler than average February. The stark temperature contrast from the west to the northern Rockies and Great Plains continued with areas in Montana running 10-15°F colder than average for the month. For the rest of the US the coldest area of the country was the Great Plains through the Great Lakes while the eastern third of the country was much warmer than average (not shown). Precipitation amounts were mixed across the rest of the country, dominated by 200-300% of normal precipitation in the Mississippi and Ohio river valleys (not shown). 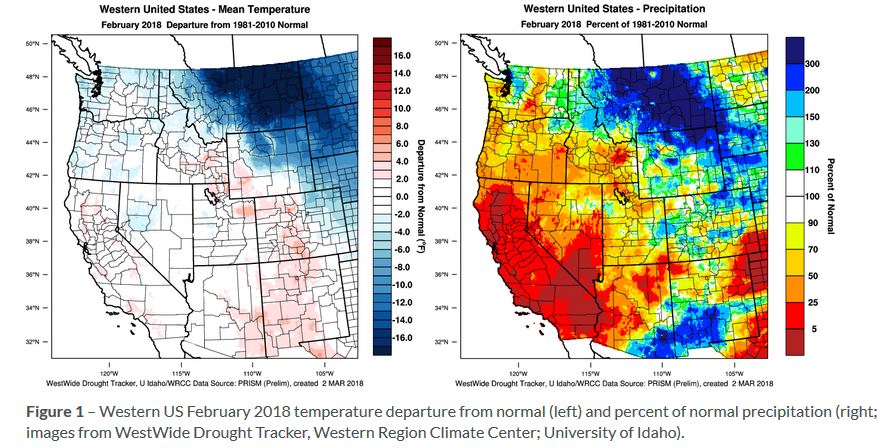 The current water year continues to show the much warmer and drier conditions for the majority of the western US (Figure 2). Temperatures continue to run above normal in most areas of California, the Great Basin up into Idaho, and the desert SW (1-5°F). The Rockies are the divide between the warmer and cooler areas, showing the geography of the ridge that keep the west warm and dry for the first half of the winter. Closer to average conditions have been observed in portions of Washington and Oregon. For the rest of the US, the current water year period is running warmer than average except in the Great Plains which remains below average (not shown). Water year precipitation remains much below average for the majority of the western US (Figure 2). Central to Southern California across into the desert southwest and Four Corners region are running 20-60% of normal, while northern California and much of Oregon and southern Idaho have been 60-80% of normal. As a result, current snow water equivalents are running 40-60% of average in Oregon, California, Nevada and the southern Rockies with only the northern Rockies running more than 100% of average (not shown). The rest of the country has been mostly dry as well, with only Montana, the Great Lakes region, northern New England and the Ohio River valley being wetter than average. As mentioned here previously, the pattern in both temperature and precipitation for the winter so far has followed what was forecasted back in October from the moderate La Niña conditions in the tropics (see section below). 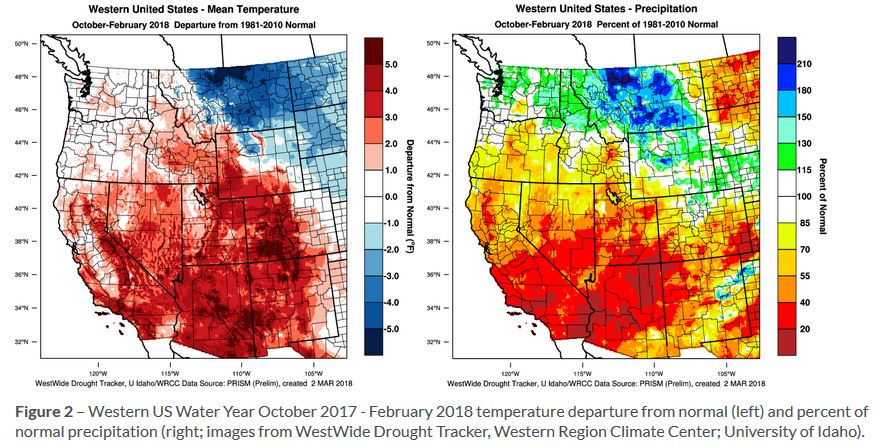 Drought Watch – The US drought footprint continues at near record levels due to the relatively dry water year to date in the west (Figure 2) and over the majority of the country (Figure 3; left panel). Except portions of the Gulf Coast and Florida, nearly the entire southern tier of the US is now under moderate to extreme drought conditions with the Four Corners through to the panhandles of Texas and Oklahoma being the most extreme. The most recent drought monitor (Figure 3) shows that drought conditions from the desert SW and Southern California have extended throughout the majority of northern California, most of Oregon, southern Idaho, and all of Nevada. The US seasonal drought outlook continues to forecast persistence or further develop through the end of May in central to southern California across to Texas (Figure 3, right panel) while Northern California, Nevada and eastern Oregon will likely see drought conditions develop further. The seasonal forecast is also indicating that the driest areas of eastern Montana and the western Dakotas will likely see drought persist into the summer.

La Niña Watch – In late February 2018, the tropical Pacific reflected La Niña conditions, with SSTs in the east-central tropical Pacific in the range of weak to moderate La Niña and most atmosphere variables showing patterns suggestive of La Niña conditions (Figure 4). The collection of latest ENSO prediction models indicates weak La Niña conditions continuing through the Northern Hemisphere early spring, followed by a return to neutral conditions during late spring. Forecaster consensus across numerous agencies favors the continuation of weak La Niña conditions through May. As mentioned in previous reports, I believe if the forecasted conditions for La Niña hold true, the next few months will continue to be warm and dry in the southern half of the US; wet and ‘coolish’ in the north (see forecast periods below and Appendix Figure 1).

North Pacific Watch – the North Pacific SST has shifted slightly from the last few months, but not enough to call for significant changes to the forecast. The moderately cool SSTs remain in the Gulf of Alaska but has shifted eastward closer to the west coast (Figure 4). While the pool of cool SST has shrunk in size, the overall pattern continues to resemble the negative or cold phase of the Pacific Decadal Oscillation or PDO, a large-scale, long-term climate variability mechanism in the North Pacific Ocean that is closely associated with El Niño-La Niña cycles. This pattern continues to show a more in phase relationship with the Tropical Pacific, which typically means that the expected role that each mechanism plays is typically more enhanced. Analog years for this spring season using the current state of ENSO and the PDO indicate increased chances for near to below normal temperatures across the PNW during March-April-May, with the greatest possibility of below normal temperatures for Oregon and Washington areas east of the Cascades (see forecast below). These analogous years indicate increased chances for near to slightly above normal precipitation, with above normal probabilities highest for mountainous areas, the Cascades westward, Northern California, and interior western Oregon. Points south into California and the desert SW have warmer and drier conditions in analogous years with La Niña and a cold phase PDO. 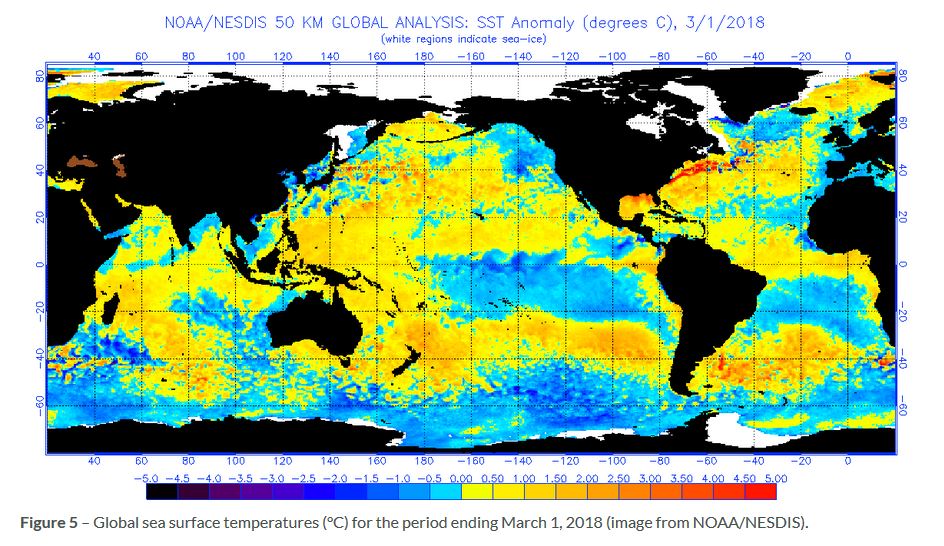 30 Day (valid March 1-31): Following on the shorter term forecasts above, the overall pattern for the month of March looks to remain cool and wet in the west. Northern California through the PNW and into the northern Rockies will likely be the wettest and coldest areas (see Appendix Figure 1). Much of the rest of the country is forecast to be warmer than normal during March, except the southeast which has equal chances of being slightly cooler to slightly warmer than average. The desert SW across into Texas and up into Colorado will likely stay on the dry side during the month while the Gulf Coast and portions of the Mississippi and Ohio river valleys are forecast to be wetter than average.

90 Day (valid March-April-May): Even with the current cool and wet conditions, the general forecast for the spring continues the pattern resulting from a La Niña winter for March through May (see Appendix Figure 1). The MAM forecast is pointing to conditions similar to last year at this time with a cooler than average period for the PNW across to the northern Rockies and into the Plains. The southern tier of the United States continues to be forecast to be much warmer than normal. The precipitation forecast over the next 90 days includes the likelihood of the northern tier of states being above average transitioning to the southern tier of states likely being below normal. The west coast is expected to have a similar pattern with northern areas being near normal to wetter than average and drier than average in southern California and the southwest. 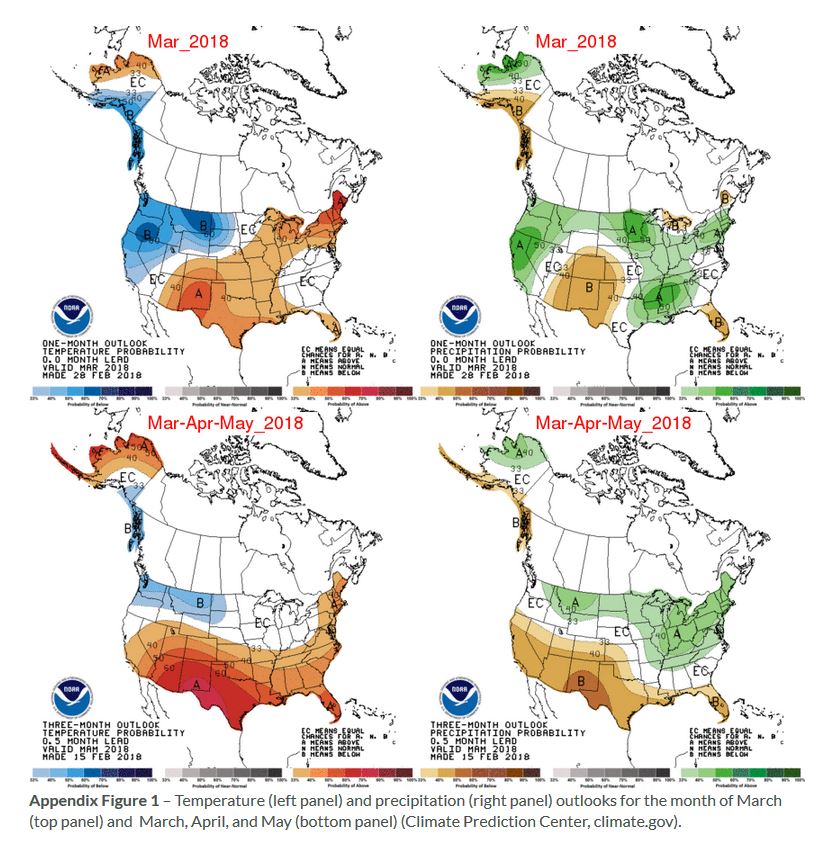