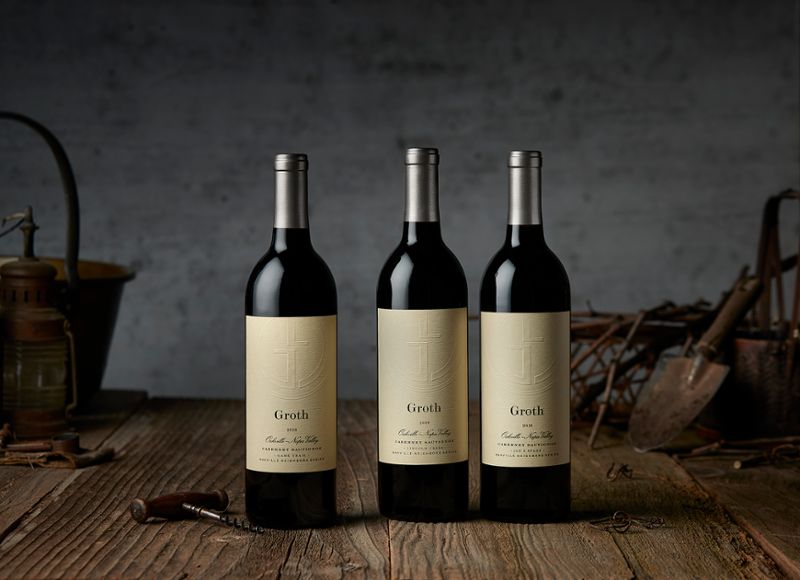 OAKVILLE, NAPA VALLEY, Calif. (June 7, 2021) — Groth Vineyards & Winery has released the Oakville Neighbors Series, a new portfolio of limited-production, single-vineyard Cabernet Sauvignons sourced from distinguished grower-partners who have helped make the Oakville AVA one of the most highly regarded appellations in Napa Valley. Coinciding with the Groth family’s 40th year of growing grapes and making Cabernet Sauvignon in the Oakville AVA, the Oakville Neighbors Series is only available directly through the winery tasting room, wine club and website (Grothwines.com). The three wines in this initial release are priced at $75 each.

“The Oakville Neighbors Series is a platform for exploring the incredible diversity of Oakville Cabernet,” President & CEO Suzanne Groth said. “The wines tell stories about this place we call home, narratives about the land and vineyards, and also the people who have believed in, shaped and brought to prominence the Oakville AVA.”

Groth’s Oakville Neighbors Series debuts with three single-vineyard Cabernet Sauvignons from the 2018 vintage. “These are winery-driven wines, that is, small lots from the 2018 vintage that presented themselves in the cellar,” Groth said. “The vineyard sources for the series may or may not change from vintage to vintage. The only parameter is that each wine stand on its own as a distinct expression of the Oakville appellation.”

The 2018 wines in the Oakville Neighbors Series are sourced from grower-partners with whom the Groth family has had long relationships, reaching back as far as 35 years or more. The names of the wines are fanciful, homages to the growers vs. the names of the vineyards themselves.

The Lincoln Creek Cabernet Sauvignon comes from a vineyard owned by Ren Harris, sometimes referred to as the “grandfather of Oakville,” and his wife, Marilyn. Harris, who has farmed in Oakville since the 1970s, guided Dennis and Judy Groth to their Oakville Estate in the early 1980s. The vineyard is on the west side of Oakville at the base of the Mayacamas mountain range.

Joe’s Spade comes from a vineyard owned by the Taddei family, with whom the Groths have a long history as the sole purchaser of their fruit. Farmed today by Kara Taddei, Joe’s granddaughter, the
20-acre vineyard is on the west side of Oakville. The wine’s name references the Taddei family logo that appears on their grape bins.

The Groth family has worked with well-known vineyard manager Alex Vyborny, whose family owns the vineyard which is the source for the Game Trail Cabernet Sauvignon, for over 30 years. Farmed by Vyborny and his son, Ben, the vineyard is in the southeast corner of the Oakville AVA along the Silverado Trail, directly across from the Rector Reservoir Dam. This is a prized area of Oakville, with prestigious neighbors and crumbly, red iron soils sloughed off the Vaca Mountain range to the east.

Dennis and Judy Groth made a life-changing investment in 1981 when they bought a vineyard on Oakville Cross Road, in the heart of Napa Valley, with hopes it would produce world-class Cabernet Sauvignon. It didn’t take long for their intuition to be proven right. Robert Parker of the Wine Advocate gave the Groth 1985 Reserve Cabernet Sauvignon the distinction of being the first 100-point U.S. wine.

Today, with Dennis and Judy’s daughter, Suzanne Groth, as President & CEO, Groth sustainably farms two estates totaling 165 acres with the dual goals of producing the highest-quality, most elegant wines we can while caring for our estate for future generations. The winery produces critically acclaimed Cabernet Sauvignon, Sauvignon Blanc and Chardonnay.

Tastings are available daily from 10 a.m. to 4 p.m. by appointment. For reservations and inquiries call 707-754-4254, email concierge@grothwines.com or visit Grothwines.com. Follow Groth on Facebook (@GrothVineyards) and Instagram (@grothwines).