Husband and Wife duo, Danny and Katie Fay, have officially released their first wine, a 2015 Moon Mountain District Cabernet Sauvignon, on St. Patrick’s Day. The couple has been organically farming and patiently crafting a few barrels of Moon Mountain Cabernet Sauvignon since 2015. The Sonoma based couple plan to build a portfolio of Bordeaux and Rhône varietals from mountain vineyards, most of which they lease and organically farm with their brother-in-law, Matt Simpson. Current vineyards include Moonridge Vineyard farmed by viticulture legend, Phil Coturri, and Cabak Vineyard and Nicholas Vineyard both farmed by Danny and Matt.

“Hill of Tara wines is our tribute to organic farming, mountain vineyards, and an ode to our Irish ancestors, who farmed the most sacred land in Ireland, the Hill of Tara,” said Danny. “We have been lifelong students of wine, and are both humbled to be a part of the next generation of Sonoma Valley vintners and winegrowers. We are thrilled to share our new wines and build a homegrown, authentic business from the ground up within our special community called Sonoma Valley.”

Located an hour outside of Dublin, Ireland, the Hill of Tara is the former seat of the High King of Ireland, and the country’s most sacred piece of land. A royal property ruled by 142 Kings over thousands of years, the Hill of Tara is one of the most significant and spiritual places in the world. There are tombs and chambers older than the pyramids, astrological stone formations older than Stonehenge, and it's even the site St. Patrick confronted the Pagan King and started spreading Christianity throughout Ireland in 432 AD. Dating back nearly 5,000 years, it's a magical place that Danny’s family owned, farmed and preserved for several generations.

“This wine brand is about good old fashion farming, we are a small team organically farming a few vineyards up in the mountains of Sonoma Valley,” Danny said. “We do everything with quality in mind, we understand the reward that comes with patience and we work together as a family to create a wine that truly expresses the vintage, the vineyard and the craftsmanship we took to produce it.”

Here’s a 90 second video that shows the story of our first wine from harvest to bottle.

Born in Oxford, England, Danny grew up in Ducklington, a small village with more ducks than people in the West Cotswolds of Oxfordshire. At nine years old, Danny immigrated to California with his family and settled in the Sonoma Valley in 1994. He pursed degrees in Wine & Viticulture at Cal Poly San Luis Obispo and completed a Wine & Viticulture degree and a Masters in Wine Business from Bordeaux Ecole De Management in Bordeaux, France. Upon graduation, Danny moved back home to Sonoma Valley and began working at Benziger Family Winery, then co-founded Envolve Winery in 2011. He has been philanthropically involved as the Vice President of the Sonoma Valley Vintners & Growers from 2013-2016 and a Board of Director with the Sonoma Valley Mentoring Alliance from 2014-2016. Currently, Danny serves as General Manager of Kanzler Vineyards in Sebastopol, California.

Originally from the small town of Ojai, California, Katie headed to Northern California to attend Sonoma State University where she graduated with a B.S. in Wine Business Strategies and dove head first into her wine career. Katie's first job in the wine industry was at Kosta Browne Winery in Sebastopol, California as their very first Marketing Intern. It was there she built her foundation, knowledge, and drive to pursue her dream in the wine industry. Katie has continued to build her career in wine at some of the most renowned wineries in Napa and Sonoma Counties, including Chateau Montelena, Three Sticks Wines, and currently, Lambert Bridge Winery.

Matt Simpson is also a native to Sonoma Valley. After obtaining a Business Degree from Menlo College, Matt returned to the valley and joined Enterprise Vineyards learning organic and biodynamic farming practices from legendary grape grower Phil Coturri. Matt's farming practices parallel Phil's visions of a purely organic farm, and they continue to work side by side while Matt spends most afternoons with Danny in Hill of Tara vineyards.

“We often refer to ourselves as ‘the Smallest Winery in America’ due to the fact that we started Hill of Tara Wines with two barrels produced in the back of our friend’s warehouse in Sonoma. We don’t have a safety net to fail – all of our life’s savings are within our wines + barrels. However, our drive to create a brand that is unique and a true representation of ourselves and our vineyards is what keeps us going. We know it will be worth the risk!” said Katie Fay.

The couple will release their Moon Mountain Cabernet on St. Patrick’s Day each year, and come 2021 a Fall Release of their Cabernet Franc + Grenache. For more information, or to sign up on their mailing list to receive an allocation offering, please visit www.hilloftarawines.com. 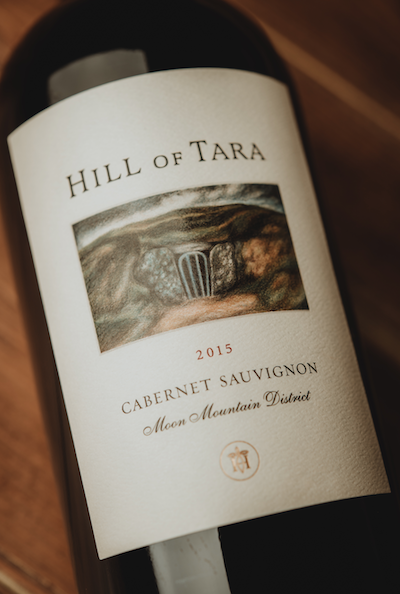